When the Smoke Hit the Fan [*SIGNED*] 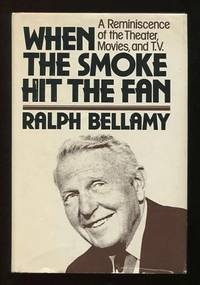 by Bellamy, Ralph
Garden City NY: Doubleday & Company, Inc.. Fine in Near Fine dj. 1979. First Edition. Hardcover. 0385148607 . [no discernible wear to book; jacket has a tiny nick (insect-nibble) at top corner of front flap, short horizontal crease at bottom of front panel]. (B&W photographs) INSCRIBED ("To Ann Corio / Thanks for your contribution / I hope it brings back memories") and SIGNED by the author on the ffep; also laid in is a 5x7 portrait photo of Bellamy. "A reminiscence of the theater, movies, and T.V.," by the veteran actor who morphed gradually and gracefully from a light leading man in Hollywood's Golden Age to a stalwart TV supporting/character actor (including, alas, guest-star gigs on both "Fantasy Island" and "The Love Boat"), with a notable mid-career high point on Broadway, as FDR in "Sunrise at Campobello" (reprised for the subsequent film version). He was always dependable, and despite being generally unprepossessing was so much his own "type" that his actual name became a famous laugh-line in HIS GIRL FRIDAY, when Cary Grant described the character played by Bellamy as looking "like that fellow in the movies, you know...Ralph Bellamy!" (Ann Corio, to whom this copy is inscribed, was one of the great ecdysiasts of the burlesque era; her referenced "contribution" to the book basically consists of Bellamy telling the story of how a friend's recollections of burlesque led him (Bellamy) to get in touch with Ms. Corio, which leads to a brief correspondence and him quoting several excerpts from her book "This Was Burlesque," tossing in a few quotations from other friends about their memories of the good ol' burlesque days, and capping it all off by reproducing a two-page letter from Robert Alda about his beginnings in burlesque -- all in all, about a 5-page digression on the topic, which if nothing else illusrates the rambling, anecdotal nature of this memoir.) Signed by Author . (Inventory #: 24613)
$40.00 add to cart Available from ReadInk
Share this item
ReadInk
Offered by

The Mistaken Fury, and Other Lapses

Oxford : B.H. Blackwell , 1914
(click for more details about The Mistaken Fury, and Other Lapses)

New York : Random House , (c.1955)
(click for more details about The Long Body)
View all from this seller>