The Folly of Prohibition: Views of Leading American Newspapers, Public Men and Ministers 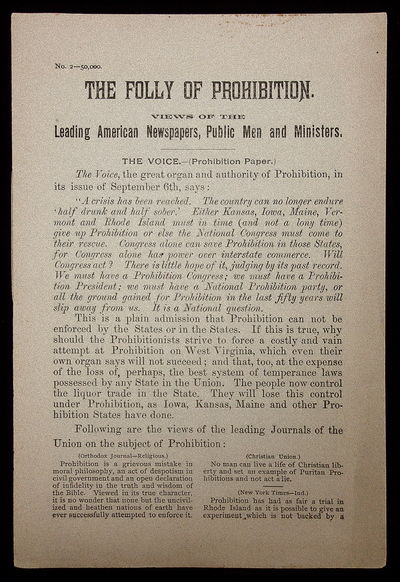 The Voice (Prohibition Paper), c. 1888. 16pp. An attempt to rebuke the idea of prohibition through the use of quotes that support the ineffectiveness of it. Starting with a passage from "The Voice" which was the prohibition newspaper, the argument against prohibition, and the inability to enforce it, is briefly commented on. Then pulled quotes from various sources are used, divided into three categories. There are quotes of various length pulled from newspaper articles like the New York Times, Boston Globe, Providence Journal and Omaha Herald. Then are quotes from prominent men, with some historical figures, like Thomas Jefferson, Abraham Lincoln. Also included is Bodwell, governor of Maine,Senator Richard Coke, and Herbert Spencer. The third category is leading ministers that dismiss the religious impetus for prohibition, with quotes from Francis Murphy, Rev. H.P. Collins and discussion from the Episcopal Conference. Measures 8 1/2" x 5 3/4". (Inventory #: 27005240)
$85.00 add to cart or Buy Direct from Eclectibles
Share this item