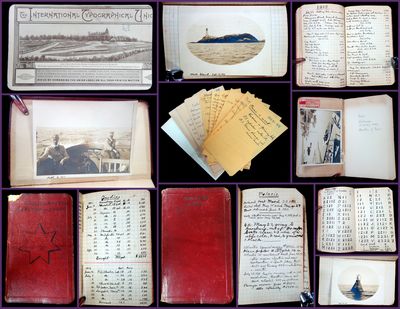 Boston, MA: F. W. Barry, Beale & Co., 1911. An unknown boatman's journal detailing the mileage, expenses, and trips taken on a launch (an open motor boat) named Polaris. The journal has been divided into several sections, with one side of the journal being used as a "Mileage and Cash" ledger, while the back portion is used for "Miscellaneous and Operation of Engine." These titles have been written on the journal's cover so that the reader knows which section they are on. Starting on the "Miscellaneous and Operation of Engine," the journal starts in 1911, when the boat was ordered that March. The owner visited the shop twice before the boat was delivered to him in 1911. Based on anecdotal evidence contained within other entries in the journal and advertisements in local newspapers (not included) that ran around the time of purchase, the boat was most likely constructed at the Atlantic Company in Amesbury, MA. and was a gurnet dory. What follows are various entries of advice from friends or workers at the Atlantic Co. on how to run the boat's engine and records of minor repairs. Additionally there are summaries of the 1911-1913 seasons chronicling the time in the water, distance traveled, gallons of gas used, and repairs/maintenance. Next, is a chart that states the distances to various points traveled to in miles. This was most likely complied in an effort to know how much gas might be need for various trips. Lastly, in this portion of the journal is a section of pages which gives instructions on how to use the engine and perform maintenance on it. Flipping the journal over and starting on the "Milage and Cash" cover, the journal records the date of each trip take, its starting point and/or destination as well as the mileage of each trip. Often times there are notes regarding the people accompanying the owner on the trip, as well as short notes on what the trip was for, such as coon shooting or fishing. At the end of each year the total mileage is tallied up. After several blank pages a ledger for cash expenses incurred, such as an anchor and fire extinguisher. Immediately following this is a list of gasoline expenditures, including the gallons bought and the cost. At the end of each year the total amount used has been added up, and, for example, in 1911 190 gallons costing a total of $28.10. These various ledgers in the journal cover 4 seasons, from 1911 to 1914. At one point there are brief notes detailing the expense of storing the boat from 1915-1918, followed by the entry "Sold Polaris and tender, with fithnap and accessories, to Mrs. Anna D. Porter of 280 Lowell St. Peabody, MA, for $600. She is to pay the storage for the current year.' Following several blank pages, there are several extremely detailed records of some of the trips taken between 1911-1914. For example, on a trip from Haverhill to Annisquam (a waterfront neighborhood of the town of Gloucestor), the location of the boat was documented every ten minutes. At times these trip entries have time stamp records to the exact 1/2 minute. Interspersed throughout the journal are four photographs that have been pasted in. Two photographs are attached to the front and back interior covers and depict the boat, Polaris, itself. There are quotes about motor boats, cut from newspapers pasted behind the photographs. The other two photographs are pasted on interior pages, one is of the lighthouse on White Island, while the other one depicts a buoy. Included are ten loose sheets, mostly lists of items left in the boat, or repairs needing to be done. Lastly there is a trimmed piece of cardboard that depicts an advertisement for the International Typographical Union, that was most likely used as a book mark. Red leather covers. Graph interior pages. Approximately 1/3 filled out. Measures 6" x 3 3/4" (Inventory #: 29001105)
$175.00 add to cart or Buy Direct from Eclectibles
Share this item