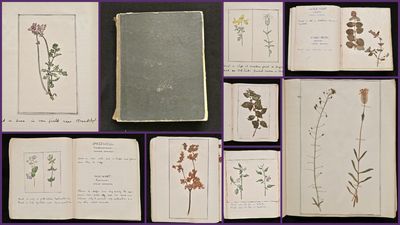 England, c1900. A charming herbarium journal that can be read in two different directions. If you open the book one way, the reader finds a herbarium with 59 pressed specimens, mainly flowers, taped to the pages. When the reader flips the book and reads it in the opposite direction, instead of specimens, there are watercolors illustrating each entry. There are 43 entries in this section, however only 33 pages of watercolors, because in 10 instances the artist doubled- up on a single page. With each specimen/illustration the author lists the plants common name, scientific name, family genus, a brief description and where and when (month only) the author found the plant. The owner of the journal most likely lived in England, as several of the descriptions of the locations the flowers were found mention the River Exe which is near Devon, England on the Bristol Channel Coast. The water colors were done first on a sketch paper which was then pasted into the journal. Similarly the specimens were pressed and dried and then secured by several small pieces of tape on a separate sheet of paper before being pasted into the journal. Of the 59 specimens, 3 have been inserted loose into the blank pages between the two sides of the journal with no identifying information. Additionally, there is 1 specimen pasted in with no description and 2 descriptions of flowers with no corresponding specimen (the latter of which was not included in the count). Some of the flora illustrated are: Primrose, Speedwell, Lady's Smock, and Hedge Wound Wort. Some of the specimens included are: Water Forget Me Not, Penny Royal, Long Stalked Crane's Bill, and Scarlet Pimpernel. Black covers, 137 leaves. Measures 7 3/4 x 6 1/2 (Inventory #: 28016150)
$550.00 add to cart or Buy Direct from Eclectibles
Share this item