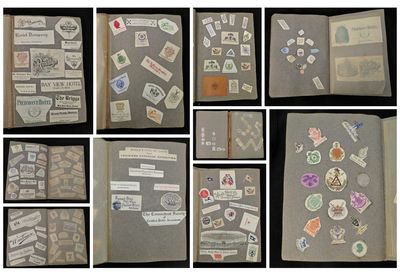 1930-1940s. A unique scrap travel book compiled by an unknown person with each page filled will snippets from letterheads from the stationary of the hotels the individual has stopped at. These pieces of the letterhead have been cut out and pasted into the album and there is a range of a singe (larger) piece to up to over twenty pieces on each page. The hotels range from all over North America, from the Wellington Hotel in Chicago to the Hodson in Waterbury, CT, to Hotel Geneye in Mexico City, Mexico to Hotel Windsor in Atlantic City, NJ. There are also letterheads from transportation means, such as "S.S. Brookline". "Duluth, South Shore & Atlantic Railway - En Route", and the "S.S. Mongolia" Sometimes the entire logo and name of the hotel isn't cut out, and only a portion, like the initials of the hotel or their logo. For example, there is one that is only the image of a shield with "The Barclay" written on top of it. Additionally, there are also a few pages of cutouts from military letterheads such as "United States Army", "Army & Navy", "Second Army Corps", and the "Metal of Honor". In the beginning of the album the pieces were arranged with purpose, such as creating the letter "W", within a few pages this effort ended. Also includes a few pages of monograms and fraternity insignias, college flags, fraternal organization insignias and more. Fifty (50) leaves with virtually all with material covering the front and back pages.The album showcases the wide variety of styles and designs hotels used on their stationary. While the majority of these letterheads are in black and white, there are a few that have color as well as being embossed. Interleaves. Leather cover. Measures 10" x 7". (Inventory #: 28001350)
$225.00 add to cart or Buy Direct from Eclectibles
Share this item