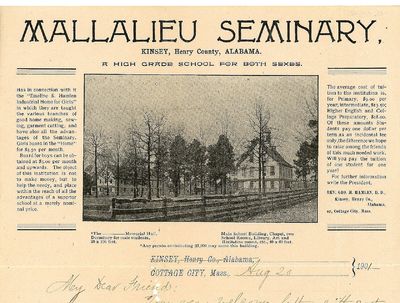 by Mrs. Geo. M Hamlen
Kinsey, Henry County, ALA, 1901. An 11" x 8 1/2" letter sheet with a large image from a photograph of the exterior of the Mallalieu Seminary, Kinsey, Henry County, Alabama. The adjacent narrative provides information on the school, it's fees and affiliation to the "Emeline S. Hamien Industrial Home of Girls" in which they are taught the various branches of good home making, sewing, garment cutting and also have the advantages of the seminar". The content of the letter written to a mother who made a 20 cent donation for a King's Daughter membership and advised their work in the South is prospering with for which we thank God and take courage. Also references the recent $5,000 and $2,000 gifts received. Concludes with discussion about the Camp Meeting and upcoming King's Daughters convention at Cottage City. (Inventory #: 28001935)
$75.00 add to cart or Buy Direct from Eclectibles
Share this item