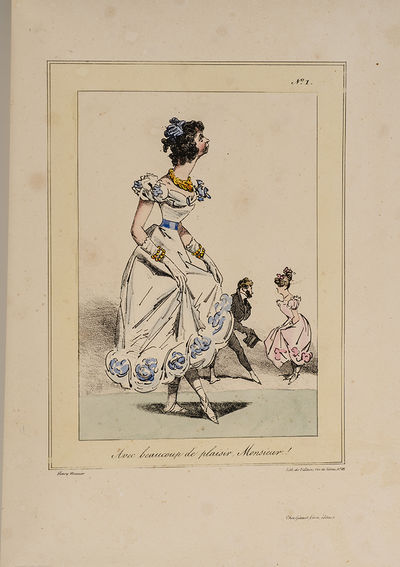 Recently bound by Roger Devauchelle in full violet cloth, black leather label lettered in gilt on front board. An excellent copy of an extremely scarce album.

According to OCLC there are only two copies in libraries and institutions worldwide: The Morgan Library & Museum (NY, USA) and Herzogin Anna Amalia Bibliothek Klassik (Germany).

"Between 1825 and 1827 Monnier passed much of his time in London, where he collaborated with Lami in what was to become the Voyage en Angleterre. On his return to Paris he embarked on a series of albums in which he recorded the manners and humors of the city with unprecedented profusion. Between 1826 and 1830 he satisfied the insatiable demand for his designs with almost 500 lithographs, nearly all of which were drawn with a pen and colored by hand. For each design he himself colored a master print and carefully supervised its subsequent preparation... Some of the salient titles in his human comedy may be mentioned. There are potpourris like Recréations du coeur et de l'esprit, Paris vivant, and Rencontres Parisiennes. Macédoine pittoresque. There are more closely focussed surveys like Les grisettes, Moeurs administratives, Galerie théâtrale, Boutiques de Paris, and Six Quartiers de Paris. There are suites like Jadis et aujourd'hui and Les contrastes, which take their departure from comparisons in time or of manners...Monnier was a satirist with a difference. His attitude towards his subjects hardly varies. His aim was to set down what he saw with elegance and precision, but with no overt interpretation or judgment" (Ray, The Art of the French Illustrated Book, p. 199). (Inventory #: 04509)
$7,500.00 add to cart or Buy Direct from
David Brass Rare Books
Share this item