On The Edge of Your Seat: Popular Theater and Film in Early Twentieth-Century American Art 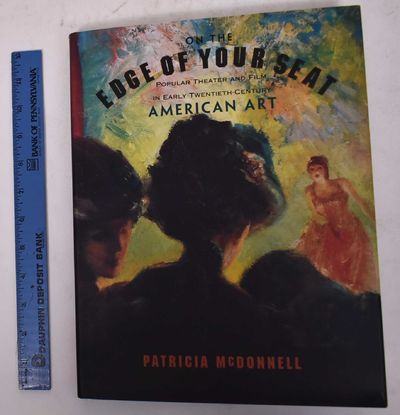 by McDonnell, Patricia
New Haven and London: Yale University Press, 2002. Hardcover. VG+/VG. Green cloth with gilt lettering on spine. Color-illustrated dust jacket. 219 pp. 95 color plates, 47 BW illustrations. Issued in conjunction with a series of 2002-2003 exhibitions presenting "more than one hundred paintings, drawings, watercolors, and photographs that convey the highly charged experience of attending vaudeville, early moving-picture shows, and other forms of popular amusements. These works of art reveal much about the beginnnings of modernity in the United States and about how artists in early twentieth-century America searched for new pictorial vocabularies to express the profound change and dynamism of their time." (dj of hardcover edition) Consists of ten illustrated and thematic essays. Fun for browsing, and informational as well. Contents as follows: American early modern artists, vaudeville, and film / Patricia McDonnell -- It begins with the lights: electrification and the rise of public entertainment / David Nasaw -- "A decided sensation": cinema, vaudeville, and burlesque / Robert C. Allen -- Setting the stage for motion pictures / C. Lance Brockman -- In order: fragmentation in film and vaudeville / Leo Charney -- Charles Demuth's vaudeville watercolors and the rhythm and spectacle of modern life / Laural Weintraub -- Edward Hopper and the theater of the mind: vision, spectacle, and the spectator / Robert Silberman -- Everett Shinn and the intimate spectacle of vaudeville / Sylvia Yount -- City, stage, and screen: John Sloan's urban theater / Rebecca Zurier -- "A company of ghosts, playing to spectral music": Gesamtkunstkino and the future of digital cinema / Walter Murch. (Inventory #: 170134)
$29.99 add to cart or Buy Direct from Mullen Books
Share this item