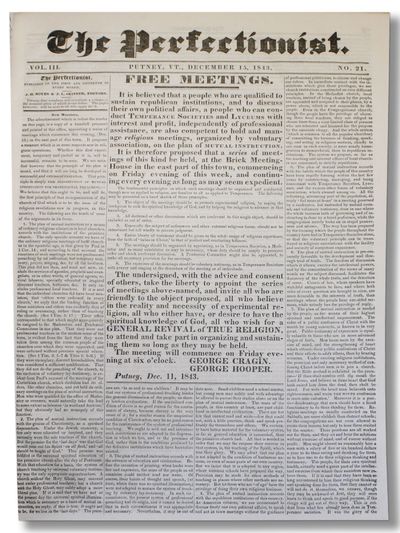 by [ONEIDA COMMUNITY] NOYES, J.H. [John Humphrey] and J.L. Skinner (eds)
Putney, VT, 1843-45. Unbroken run of forty-eight biweekly issues, comprising Vol. III, no. 1 (Feb. 15, 1843) to Vol. IV, no.24 (Feb. 22, 1845). Folio (42cm) In original publisher's binding of quarter sheep over marbled boards. Expected external rubbing and wear; internally crisp, clean and ummarked. Bi-monthly organ of Noyes's community of Bible Communists, a successor publication to The Witness. The paper was primarily an outlet for Noyes's peculiar brand of theocratic philosophy, which incorporated a blend of Free Love and so-called "male-continence" (i.e., intercourse without ejaculation); The Perfectionist was distributed nationally and served as a recruiting tool for the community until its members were driven out of Vermont in 1848. The community re-formed in Oneida, New York in 1848, where it survived until the 1880s. A substantial remainder of this and many other Oneida publications came on the market in the mid-1970s, but cohesive runs have grown increasingly uncommon in commerce. DARE 1518. (Inventory #: 43844)
$750.00 add to cart or Buy Direct from
Lorne Bair Rare Books
Share this item

Through Trade to the Co-operative Commonwealth