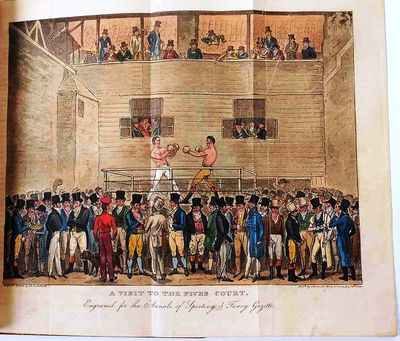 London: Sherwood, Neely, and Jones, 1822-1828. First Edition. Hardcover. Occasional light foxing or staining but contents generally clean. Attractive bookplate of Edward Motley Weld on the front pastedowns of all volumes. Three covers detached, rubbing to the raised bands. Very Good. Complete in 13 octavo (5-1/4" x 8-1/2") volumes bound in later polished calf leather with gilt rules and heavily gilt-decorated spines with five raised bands and contrasting gilt-lettered morocco spine labels, gilt dentelles, marbled endpapers, all edges gilt. Without the rare June, 1828 issue, as usual. Illustrated with a large folding map and 153 plates, some folding, of which 65 are hand-colored, as well as numerous woodcut illustrations within the text, by artists such as Alken, Cruikshank, Roberts, Sutherland, Berenger, Landseer, and others. A comprehensive view of the life and habits of those who lived in the English countryside, often seen as a companion work to Ackermann's REPOSITORY OF THE ARTS, which chronicled the taste and fashions of sophisticated metropolitan life. Tooley 64. (Inventory #: 019231)
$3,500.00 add to cart or Buy Direct from Charles Agvent
Share this item