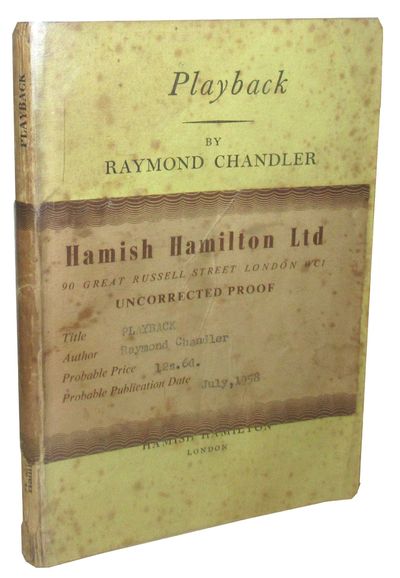 by Chandler, Raymond
London: Hamish Hamilton, 1958 Uncorrected Proof copy. Publisher's light greenish yellow paper wrappers, with the publisher's printed brown label to the front wrapper, extending over spine onto rear board. About very good with significant foxing to wrappers, text block edges, and publisher's wraparound band, wear to spine ends with rear hinge slightly starting, interior very clean. Overall, a nice copy of this rare and fragile proof copy. Bruccoli A11.1.a Playback is the eighth and final complete detective novel in Chandler's series featuring his protagonist Detective Philip Marlowe, published in the year before the author's death. Unlike Dashiell Hammett's Continental Op and Sam Spade, who are widely considered the archetypal hard-boiled detective figures, Marlowe possesses a sensitivity underneath his tough exterior that distinguishes him from similar detective characters in the genre. Unlike many of his other novels, Playback is not set in Los Angeles, but rather in the fictional town of Esmeralda, California - a fictional representation of La Jolla, where Chandler lived towards the end of his life. In this novel, Marlowe is hired to tail a travelling woman, but ultimately must turn on his client, whom he realizes has malicious intent. Although the plot has been critiqued as weaker than the other Marlowe novels, Playback, based on an unused screenplay of the same name, is no less compelling; as the dust jacket states, the plot is not "what matters most, though suspense is there to grip you from the first page," but instead Chandler's writing makes the novel: "the sour-funny dialogue tickles you to a wry chuckle on almost every subsequently one, those terse casually thrown away pearls of seamy side philosophy in the special Chandler idiom which remains as vividly inventive as ever.". First Edition. Soft Cover. Very Good. (Inventory #: RC037)
$800.00 add to cart or Buy Direct from
B & B Rare Books
Share this item

Mosses from an Old Manse

New York: Wiley and Putnam , 1846
(click for more details about Mosses from an Old Manse)

The Woman in White

New York: Harper & Brothers , 1860
(click for more details about The Woman in White)
View all from this seller>