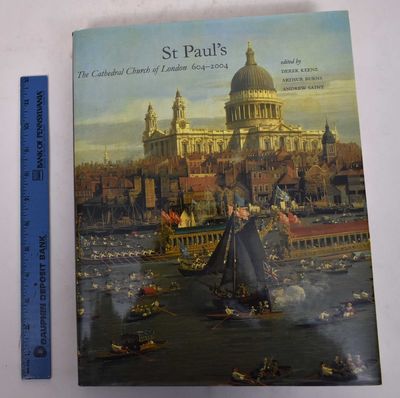 by Keene, Derek, Arthur Burns, and Andrew Saint (Editors)
New Haven: Yale University Press, 2004. Hardcover. VG/VG. Charcoal cloth boards with gilt spine lettering. Glossy color-illustrated dust jacket with gray lettering. xiii, 538 pp. BW and some color illustrations. "The present St Paul's Cathedral, Christopher Wren's masterpiece, is the fourth religious building to occupy the site. Its location in the heart of the capital reflects its importance in the English church while the photographs of it burning during the Blitz forms one of the most powerful and familiar images of London during recent times. This substantial and richly illustrated study, published to mark the 1,400th anniversary of St Paul's, presents 42 scholarly contributions which approach the cathedral from a range of perspectives. All are supported by photographs, illustrations and plans of the exterior and interior of St Paul's, both past and present. Eight essays discuss the history of St Paul's, demonstrating the role of the cathedral in the formation of England's church and state from the 7th century onwards; nine essays examine the organisation and function of the cathedral during the Middle Ages, looking at, for example, the arrangement of the precinct, the tombs, the Dean's household during the 15th century, the liturgy and the archaeology. The remaining papers examine many aspects of Wren's cathedral, including its construction, fittings and embellishments, its estates and income, music and rituals, its place in London, its library, its role in the book trade and its reputation." -Amazon. (Inventory #: 170210)
$45.00 add to cart or Buy Direct from Mullen Books
Share this item