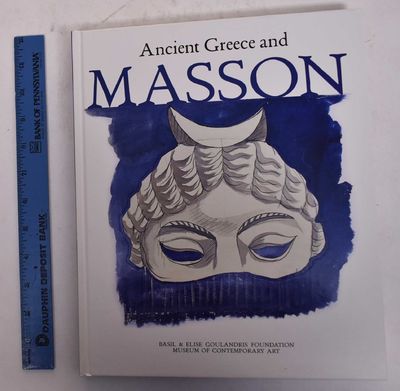 by Koutsomalles, Kyriakos, Didier Ottinger, and William Jeffett
Torino: Umberto Allemandi, 2007. Hardcover. VG. White, blue, and color--illustrated boards with black and blue lettering. 139 pp. BW and color illustrations. Catalog of an exhibition held at the Basil & Elise Goulandris Foundation, Museum of Contemporary Art, Athens, June 30-Sept. 10, 2007. The exhibition "André Masson and Ancient Greece" focuses on the theme of the metamorphosis of man's nature. It presents the dimension that was given, by ancient Greek history and philosophy, to the equilibrium between the "rational" and the "sentimental.". The exhibition of 2007 will include some of the most important paintings and drawings of Masson, representing themes from ancient Greek mythology, such as the myth of the Minotaure, Ariadne, Daedalus and Icarus and the labours of Hercules. (Inventory #: 170187)
$29.99 add to cart or Buy Direct from Mullen Books
Share this item