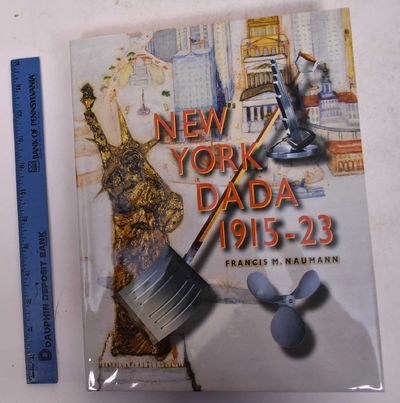 by aumann, Francis M.
New York: Abrams, 1994. Hardcover. As new in shrinkwrap. Orange cloth with color pictorial glossy dustjacket. 255 pp., 42 color and 178 bw plates. "For about ten years, beginning with the Armory Show in 1913, New York City was host to the odd-sounding accents and queerer-looking paintings and constructions of a mixed bag of European and American avant-gardists. Besides the inscrutable figure of artist Marcel Duchamp, the European contingent included such iconoclastic visitors as the playboy painter Francis Picabia, the composer Edgard Varese, the diplomat Henri-Pierre Roche (author of Jules et Jim and adviser to the extraordinary collector John Quinn), and painters Albert Gleizes and Jean Crotti. Among the Americans were the photographer/painter/constructor Man Ray, the Precisionist painter and Fortune photographer Charles Sheeler, the Futurist Joseph Stella, and the Pennsylvania artists Charles Demuth and Morton Schamberg." "New York Dada is the first comprehensive study devoted exclusively to the accomplishments of these vanguard artists in America in the period 1915-23 - among the most underappraised, though most influential periods in the history of American art. Within months after the word "Dada" was discovered by a group of refugee artists and writers living in Switzerland, news of the movement reached artists in New York, who, by then, had already made works of art and engaged in activities that were similar in spirit to those produced by their European counterparts." "For this groundbreaking book, Francis M. Naumann has interviewed virtually all the survivors and has amassed a wealth of rare photographs and newspaper clippings, including pictures of early installations of modern art in homes and exhibitions, to capture the spirit of New York Dada in a work that is both informative and captivating. In view of the current trend to investigate the potential of a conceptually oriented approach to art and to the art-making process, it is perhaps no coincidence that New York Dada is now finally recognized for the important role it played in the formative phases of a modernist aesthetic."--Jacket. Contents as follows: Preface and Acknowledgments; (starting p. 6) --; Introduction; (starting p. 8) --; 1; Proto-Dada; (starting p. 12) --; 2; The Arensbergs; (starting p. 22) --; 3; Marcel Duchamp; (starting p. 34) --; 4; Francis Picabia; (starting p. 56) --; 5; Man Ray; (starting p. 76) --; 6; The Arensberg Circle; (starting p. 94) --; Albert Gleizes and Juliette Roche; (starting p. 96) --; Jean and Yvonne Crotti; (starting p. 100) --; Edgard Varese; (starting p. 105) --; Henri-Pierre Roche; (starting p. 109) --; Beatrice Wood; (starting p. 112) --; Clara Tice; (starting p. 117) --; Charles Sheeler; (starting p. 121) --; Morton Schamberg; (starting p. 126) --; Charles Demuth; (starting p. 130) --; John Covert; (starting p. 134) --; Joseph Stella; (starting p. 142) --; The Stettheimer Sisters; (starting p. 148) --; Katherine Dreier; (starting p. 155) --; Arthur Cravan and Mina Loy; (starting p. 162) --; Baroness Elsa von Freytag-Loringhoven; (starting p. 168) --; 7; The Independents; (starting p. 176) --; 8; New York Dada; (starting p. 192) --; 9; Aftermath; (starting p. 212) --; Notes; (starting p. 224) --; Selected Bibliography; (starting p. 244) --; Index; (starting p. 250) --; Photograph Credits; (starting p. 255). (Inventory #: 170242)
$24.99 add to cart or Buy Direct from Mullen Books
Share this item