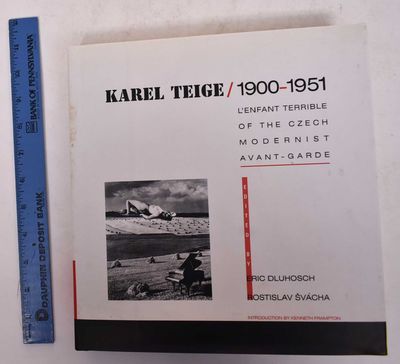 by Dluhosch, Eric and Rostislav Svacha
Cambridge: MIT Press, 1999. Hardcover. VG/VG- light wear and soiling to dust jacket.. Red and black cloth boards with red stamped spine lettering. White and BW-photographic dust jacket with black lettering. xxvi, 420 pp. BW illustrations. "Karel Teige (1900-1951), a leading figure of the European avant-garde of the 1920s and 1930s, participated in every important artistic argument and controversy of those turbulent years. He edited the most influential avant-garde journals on Czech and International cultural developments and wrote profoundly original essays and books on the theory and criticism of art and architecture. He also produced paintings, collages, photomontages, film scripts, book covers, and typefaces and participated in theatrical performances."--Jacket. "When the Communists took over Czechoslovakia in 1948. Teige was first hailed as a progressive, then denounced for not toeing the party line - even though he was never a card-carrying member of the Communist Party. He died a broken man, forbidden to speak out or to publish. Since the recovery of his work after the "velvet revolution" of 1989, his legacy has been revived not only in Prague but also in Western Europe and the United States."--Jacket. (Inventory #: 170255)
$29.97 add to cart or Buy Direct from Mullen Books
Share this item