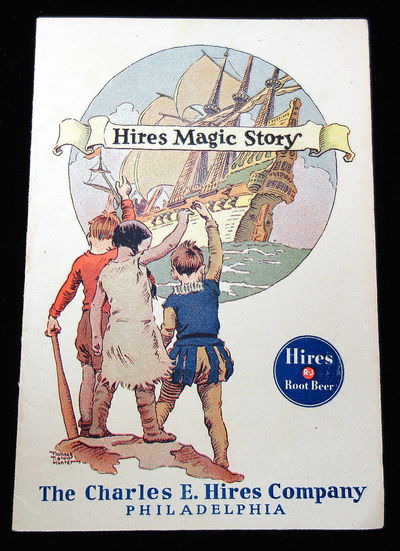 Philadelphia: Charles E. Hires Company, 1934. The Charles E. Hires Company produced Hires Root Beer, which was first introduced in 1876 and is considered the second longest continuously made soft drink in the United State (now owned by Dr. Pepper Snapple Group). Charles Hire believed firmly in the power of advertising, famously stating, "doing business without advertising is like winking at a girl in the dark. You know what you are doing, but nobody else does." This particular book has a series of invisible pictures that once rubbed with either 'a coin, spoon, or pencil' would be revealed. The story is about three children, White Birch, Ginger and Rooty, and how they discover the different flavors of root beer: Birch Beer, Ginger Beer and the original Root Beer. On each page is a colorful illustration, story text, and a magic square that, when rubbed would reveal another picture. None of the hidden images have been revealed. There is an offset printing error on several of the interior pages that only effects the illustrations. 12 pp. (including wrappers) Measures 6" x 4" (Inventory #: 27100204)
$45.00 add to cart or Buy Direct from Eclectibles
Share this item