Engravings of the Bones, Muscles and Joints 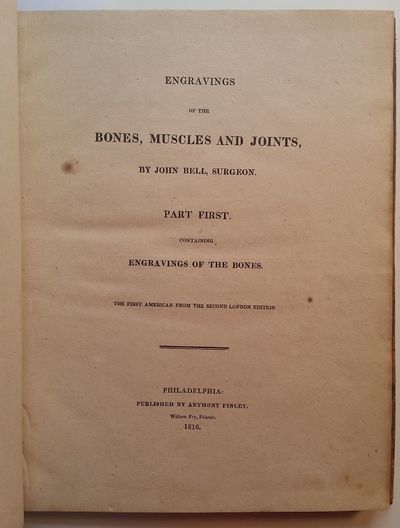 by Bell, John M.D.
Philadelphia: Published by Anthony Finley, 1816. Bell, John M.D. Engravings of the Bones, Muscles and Joints. Philadelphia: Published by Anthony Finley, 1816, 1815. $ 400.00 Two volumes. 4to. 275 x210 mm. (10 3/4 x 8 1/4 inches). 108pp.; 123 pp. Illustrated with 32 full-page engravings after designs by the author. Bound in contemporary American sheep, rubbed yet sound; gently foxed throughout. Ex-libris of Dr. Willard I. Myers. First American Edition from the Second London. John Bell was Scotland's most important teacher of surgery and anatomy at the turn of the 19th century and drew large audiences to anatomical lecture theater at the Royal Academy of Surgeons in Edinburgh. A controversy over teaching schedules and access to the lecture hall prohibited him from continuing to teach and for the next three decades he dedicated himself to private practice and research. He is the author of Discourses on the Nature and Cause of Wounds (1793-95), Principles of Surgery (1801) and his Anatomy of the Human Body, which went through several editions. The distinguishing aspect of his works are the illustrations that he included as part of his teaching techniques. A skilled draughtsman, Bell created his own drawings and painting of his anatomical studies, which were produced in a style that was less idealized and more realistic in depiction. "Certainly, they have the immediacy of drawings made in the dissecting rooms of late Georgian Edinburgh. some are quite gruesome and even perverted. . . In their context, they are admirable." The engravings in this work are after designs by Bell and based on the second edition of the book. They are extremely well executed and are presented in a clear and uncluttered manner. The images in the first volume were engraved by Jacob J. Plocher who was best known for his views and city scenes of Philadelphia. William Kneass was the engraver for the plates in Volume 2 and he is best remembered for his engraved portraits and family scenes. Even with the light foxing that accompanies many of the plates, the set is sound and not unattractive. Roberts & Tomlinson, Fabric of the Body (1992) p. 491. Stauffer and Mantle, American Engravers on Copper and Steel, pp. 274, 421. (276). (Inventory #: 276)
$400.00 add to cart Available from
De Simone Company
Share this item
De Simone Company, Booksellers
Offered by

Through the Heel of Italy. By the Author of "Byways in Southern Tuscany" and Wayfarers in Italy

New York : Rae D. Henkle Co., Inc. , 1927
(click for more details about Through the Heel of Italy. By the Author of "Byways in Southern Tuscany" and Wayfarers in Italy)

Exeter, N.H. 1847
(click for more details about Ledgers and Day Books Detailing Shop Inventory and Sales from a Thriving Country Store)
View all from this seller>