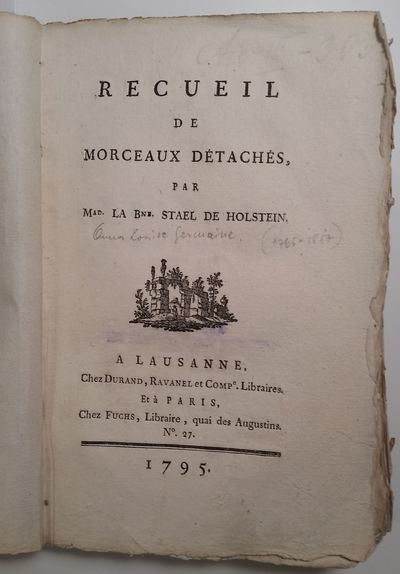 by Stael-Holstein, Louise Germaine Necker, Baronne de
Lausanne: Chez Durand, Ravanel et Comp., et Paris, Chez Fuchs, 1795. 8vo. 195 x 132 mm. (7 3/4 x 5 1/4 inches). 203 pp. Woodcut device on the title-page. Original blue paper wrappers, some soiling to wrappers, paper label with title in ink, early paper repair to lower part of spine; uncut copy; with faults a sound and not unattractive copy in original wrappers. Early collected edition of essays and novels by the French author and daughter of the Jacques Necker, banker and French economic minister to Louis XVI. Madame de Stael's (1766-1817) was one of the most influential literary voices of her time and her publications were sought after by readers from all over Europe who were interested in understanding events during the French Revolution and the reign of Napoleon I. A critic of Napoleon's rise to absolute power, she was banned from Paris in 1802 and in 1805, after his anointment as emperor, Napoleon renewed the ban against her presence in the city. Madame de Stael wrote about his reign through the prism of the Enlightenment, where individual freedom, nationhood, and the importance of societal reform for the benefit of the populace were under threat. Her voice was heard all over Europe and her ideas about constitutional government propelled her to become one of the leading intellectuals on continent. This volume, published in Lausanne in 1795 at the height of the reign of terror includes "An epistle on the misfortunes of Adele and Edouard", her "Essay on Fiction", and three novels "Mirza or a Letter from a traveler", "Adelaide and Theodore" and "Histoire de Pauline". She considered this "her early works" and show the seeds of her future observations on society and the human condition. Rare: NUC cites a copy at Harvard and OCLC adds one at Bibliothèque nationale de France. Brunet and Ebert cites only copies of her works published after her death. See Creating French Culture, Treasures from the Bibliothèque nationale de France, Yale University Press, 1995, pp. 369. (103). (Inventory #: 103)
$950.00 add to cart Available from
De Simone Company
Share this item
De Simone Company, Booksellers
Offered by