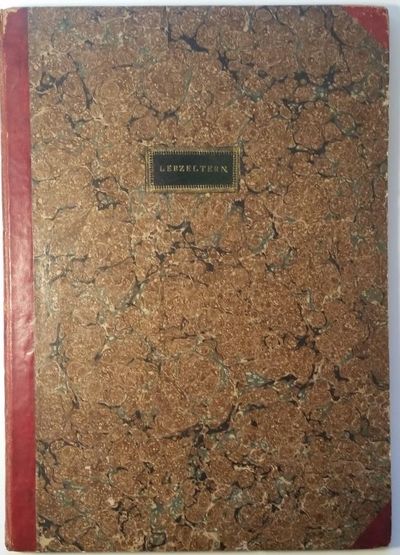 by Labruzzi, Carlo
(Rome): (Carlo Labruzzi), 1796. Folio. 415 x 302 mm. (16 ¼ x 11 ½ inches). 13 full-page etchings printed in sanguine on laid paper, each plate with a loosely inserted guard sheet (also of laid paper) with 5 dark pencil points marked as guides to the artists. Early 19th-century red leather spine and tips over marbled paper boards. Leather ownership label with the name "Lebzeltern" (Ludwig von Lebzeltern) on the front board. Binding lightly rubbed, very good copy. Rare series of etchings, by the well-known Italian artist Carlo Labruzzi (1748-1817) created for the Countess Bessbourough, Henrietta Frances Duncannon, the daughter of the noted English book collector the Earl of Spencer. During the years 1792-95 she traveled throughout Italy and must have struck up a friendship with Labruzzi while in Rome in order for this curious series of etchings to be created. The title of the work in English reads, "Figures drawn from five predestined points". The points indicate where the hands, feet, and head of the image must be, and the artist's charge was to create images of classical figures from these guide points. What Labruzzi created was a very rare series of whimsical etchings where the figures were dressed in classical garb and posed in classical positions. It appears to be a test of sorts, where a challenge was brought by a beautiful English Countess and the artist executed fanciful designs meant to capture the playfulness of the moment. The first plate includes the dedication to Countess Bessbourough and illustrates a shield bearing the arms of the family crest. This copy has laid-in a series of thirteen tissue guards, each with the five points indicated in pencil on the paper where the head, hands and feet are to be located on each plate. The tissue is probably not original with the publication of the book, because the paper stock is the same as the pastedowns of the binding. The binding it thought to be from the first quarter of the 19th century, probably executed in Germany and commission by Ludwig von Lebzeltern. Carlo Labruzzi studied landscape painting and portraiture with his brother Pietro at the Academy of St. Luca in Rome. He had great success as a landscape painter and was taken up by the English travelers who were visiting Rome on the Grand Tour. His technique brought the landscape to life and he was universally considered an artist of great merit. His most famous patron was Richard Hoare for whom Labruzzi created hundreds of drawings of the antiquities of Rome, landscape watercolors of the Roman metropolis and numerous portraits of residents and travelers. Large collections of his work formed by Hoare are now in the Vatican Library and the Biblioteca Sarti at the Roman Academy of San Luca. Ludwig von Lebzeltern(1774-1854) was an Austrian politician and diplomat who lived in Rome in 1801-06 and again in 1814-16. This book has been in the library of family until just recently when it appeared on the market in Germany. (Inventory #: 82)
$11,000.00 add to cart Available from
De Simone Company
Share this item
De Simone Company, Booksellers
Offered by

Descriptive Catalogue of Books; Embracing the Progressive Series and the National Series of Text Books, for Colleges, Academies, and Schools

by Bazin and Ellsworth and A. S. Barnes and Burr

Boston and New York 1859
(click for more details about Descriptive Catalogue of Books; Embracing the Progressive Series and the National Series of Text Books, for Colleges, Academies, and Schools)

Salisbury, Conn. : The Cantina Press , 1938
(click for more details about T. S. Eliot)
View all from this seller>