A Legend of Camelot, Pictures and Poems 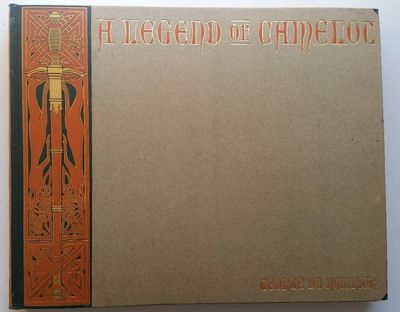 by Du Maurier, George
New York and London: Harper and Brothers, 1898. Oblong quarto. 255 x 320 mm. (10 x 12 1/2 inches). [x], 95 leaves printed on rectos only. Full page and in text illustrations by George du Maurier, text and page decorations in red and black. Dark green cloth spine, over pale green paper boards, elaborately decorated with the title in orange letters outlined in gold, and a design of an full length excaliber in gilt and orange embossed on the dark green cloth spine. Housed in the original box, corners crecked, and showing wear but intact, small piece missing at top of the cover. First edition of this compilation of Du Maurier's work, published in the form of a gift book and coffee table extravaganza. The introduction notes that most of the images and stories first appeared in Punch, with the exception of the poem entitled, "A Lost Illusion". Included are Du Maurier's "Camelot", "The Fools Parade", "Poor Pussy's Nightmare", "Two Thrones" and other stories and images. George Du Maurier, a French-Anglo cartoonists and writer was a highly successful story teller his work appeared in Punch from the 1860's to 1891. He focus much of his attention on the foibles of the various classes of people in Victorian England and was considered an astute observer of social tensions among the social strata of society. In his retirement he wrote a number of novel's including the extraordinarily successful Trilby and The Martian and other works that reflected the revival of the gothic in British literary culture. This gift book is in extremely good condition, although the box could use some repair. (Inventory #: 285)
$400.00 add to cart Available from
De Simone Company
Share this item
De Simone Company, Booksellers
Offered by