Do Tali [Do Tal, Ellora] 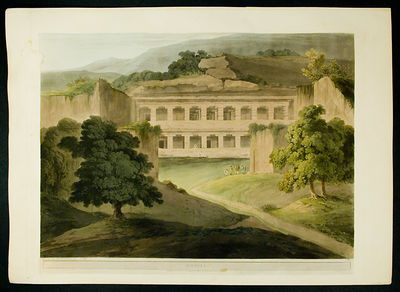 by DANIELL, Thomas (1749-1840) after James WALES
London: Published as the Act directs by Thos. Daniell, Howland Street, Fitzroy Square, 1809. Aquatint by Thomas Daniell after James Wales, coloured by hand, on 'Whatman' wove paper. Do Tali' the remarkable two storied cave complex from Plans of Hindoo Excavations in the Mountain of Ellora.

This plate was engraved by Thomas Daniell after a drawing by James Wales in 1803 and is from the part of Oriental Scenery known as "Hindoo Excavations in the Mountain of Ellora near Aurangabad". The huge complex of cave temples was actually begun by Buddhists in the 6th century, eventually including Hindo and Jain temples as well. The Daniells' Oriental Scenery is considered one of the finest illustrated works on India. Thomas Daniell and his nephew William spent nine years in India making studies, sketches and drawings of the scenery, architecture, and antiquities that graced the countryside. They then devoted a further thirteen years to publishing their remarkably accurate aquatints. In Britain, the impact was explosive. A cult of Indian architecture, landscaping and interior decoration arose, with the Royal Pavilion at Brighton as its centerpiece. The Daniells gave the English public their first accurate look at the exotic sub-continent. Their great achievement still lies in their ability to blend the picturesque with the real, resulting in images that capture the European taste for the sublime landscape, while still remaining faithful to their subjects. The Daniells brought the romance of the English landscape to the antiquities of India and provided England with an accurate vision of this wondrous country. The sixth part of Oriental Scenery is twenty-four plates based on drawings by James Wales, primarily of the excavations at Ellora. The title of this section was Hindoo Excavations in the Mountain of Ellora , near Aurungabad in Decan... The mountain contains 34 "caves" that were created to serve as monasteries and temples for Buddhists, Hindus and Jains, each religion having several spaces. Do Tal, here called Dotali, was one of the Buddhist "caves". It is three stories high and was built in the 8th century.