Report of the Case of Edward Prigg against the Commonwealth of Pennsylvania. Argued and Adjudged in the Supreme Court of the United States, at January Term, 1842 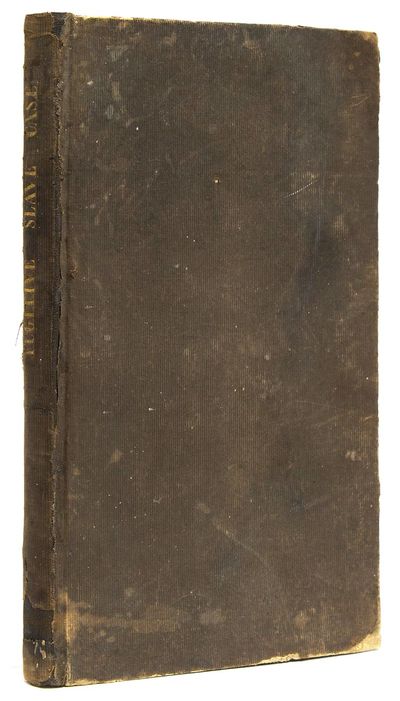 by (Slavery) Peters, Richard
Philadelphia: stereotyped by L. Johnson, 1842. First edition. 140 pp. 1 vols. 8vo. Original brown ribbed cloth, rebacked with original spine laid down, titled in gilt. Marginal dampstaining throughout, scattered foxing, some wear to boards, good. First edition. 140 pp. 1 vols. 8vo. First edition of this report of this monumental Supreme Court decision regarding escaped slaves, preceding by 15 years and rivaling in importance the Dred Scott case of 1857. "In Prigg, the Court identified slavery as a core constitutional commitment with which states could not interfere. In this case, the Court struck down northern states' 'personal liberty laws' established to protect alleged fugitive slaves from recapture without due process of law. When the professional 'slave catcher' Edward Prigg tried to remove Margaret Moran, an alleged runaway, he was unable to meet the burden of proof set out by Pennsylvania's 1826 Personal Liberty Law and failed to obtain the legal certificate permitting him to remove her. When Prigg proceeded to ignore this and removed Moran illegally to Maryland, Pennsylvania convicted him of kidnapping. The US Supreme Court, however, overwhelmingly overturned Prigg's conviction (8-1) and pronounced state laws interfering with the return of alleged runaways a violation of the Fugitive Slave Clause..." (Beaumont, The Civic Constitution, 2014, p. 128). Blockson 9905; Dummond, p. 140; Sabin 61207 (Inventory #: 313227)
$1,250.00 add to cart or Buy Direct from
James Cummins Bookseller
Share this item
James Cummins Bookseller Inc.
Offered by

Glimpses of the City of Manáos [drop title from cover]

[New York : Mercantile Illustrating Comapny , 1893
(click for more details about Glimpses of the City of Manáos [drop title from cover])
View all from this seller>