The Priest and the Acolyte 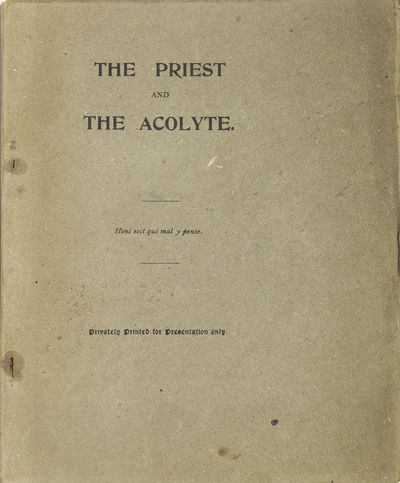 by [Bloxham, John Francis]
N.p.: Printed for Private Circulation Only, 1894. First edition. 44 pp. 1 vols. 8vo (8-1/2 x 6-7/8 inches). Original printed wrappers. Rusted staple marks showing, else fine. First edition. 44 pp. 1 vols. 8vo (8-1/2 x 6-7/8 inches). A classic of homoerotic literature and of the greatest rarity. This tale of the tragic love between a priest and his 14-year-old acolyte is believed by Timothy d'Arch Smith to be the precursor of Ronald Firbank's witty novel, Concerning the Eccentricities of Cardinal Pirelli. The Priest and the Acolyte and Wilde's Phrases and Philosophies for the Use of the Young, first appeared in The Chameleon, 1894, and for a while it was wrongly attributed to Wilde. It was the publication of Wilde's piece in the Chameleon along with the above title that had such a disastrous effect on Wilde's reputation during the Queensbury suit. "It was a tremendous misfortune for Wilde that he allowed himself to be persuaded into contributing to thes rather puerile publication...Despite Wilde's indignant denials, counsel succeeded in planting damaging innuendoes in the minds of the jury by continual reference to this magazine, and especially to the particular story which is still generally, though wrongly, considered to be by Wilde..." (Dulau). The book was printed in an edition of 100 copies only, for private distribution. Stuart Mason reprinted the story in 1907 with an introduction denying Wilde's authorship. Mendes 170; Mason, pp. 14-17; Dulau Catalogue, #245; Smith, Love in Earnest, pp. 56-59; Rose 3720 (Inventory #: 314492)
$2,500.00 add to cart or Buy Direct from
James Cummins Bookseller
Share this item
James Cummins Bookseller Inc.
Offered by

Sketches, historical and topographical, of the Floridas; more particularly of East Florida

by Lee, Charles A. [compiler]