Selection of lyric poems copied out by an educated woman, including work by Bluestocking Anna Laetitia Barbauld 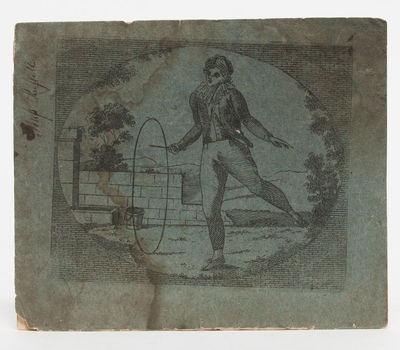 by [Commonplace Book] Mrs. Russell
[n.p.], 1830. Comprised of 7 pages in ink in a single hand, containing six works of poetry. Dark blue printed wraps over lined paper, measuring 7x 6 inches. Ownership signature of Mrs. Russell to header of front wrap. Scattered foxing and some dampstaining not affecting text. Text block loose but holding. In all, an intriguing glimpse into a woman's use of literature to express her own preoccupations with humans' place between nature and the divine.

The six poems contained in this slim volume appear to have been thoughtfully selected and carefully copied out. Indeed, among them exist several thematic threads that teach us about the elusive Mrs. Russell, who leaves no identifying information except her ownership signature. The first poem, The Silent Expression of Nature, first appeared in the religious collection Musae Biblicae (1819) before being reprinted in Pierpont's National Reader of 1829, which was designed to provide teachers with reading exercises in class and copy exercises out of class. From its opening line, it places the narrator and reader at the center of the earth and heavens, emphasizing how nature moves before "my wondering eyes," "fills my heart," and "around me falls." Not copied in full, the opening selection of the poem emphasizes the senses in these lines, and encourages the individual to experience the cosmos. The second work, titled simply Hymn, is drawn from John Bowring's 1823 Matins and Vespers, critiqued the same year by the Monthly Review which praised its "sentiments as pure and excellent, and the language is elegant and often poetical," though the editors note "we could have wished for the occasional display of a higher spirit" (Griffiths). The poem in question is pulled out as an example of a more simplistic, childlike poem of wonder. Indeed, it shows the narrator turning to the reliable comfort of sunrise and sunset to push away existential doubts. Notably, Blue Stocking Anna Laetitia Barbauld's poem Tomorrow (1773) is included within the selection. While Baurbauld had herself written a poem in praise of Bowring, this particular piece undercuts the sentiments of his, warning the reader not to trust nature because while the sun rises and sets, no individual lives to see the process without end. Across the selections, one experiences a push and pull of humanity between nature and the divine. One also sees the carefully formed letters created by Mrs. Russell, and the care she has placed into copying out these specific pieces.

With research possibilities including but not limited to paleography, gender studies, poetic publication and transmission, the role of Blue Stocking writers within the poetic community, and the use of literature to explore science and theology. (Inventory #: 2730)
$690.00 add to cart or Buy Direct from
Whitmore Rare Books
Share this item

Paris : Brentano's , 1895
(click for more details about Sonnets to the Memory of Frederick Douglass (Presentation Copy))

A Treatise on the Immutability of Moral Truth

London : Printed for A. Hamilton, Jun., and Sold by C. Dilly, G. Robinson, T. Cadell, T. Lewis, J. Walter, and R. Faulder , 1783
(click for more details about A Treatise on the Immutability of Moral Truth)
View all from this seller>