German Art from Beckmann to Richter: Images of a Divided Country 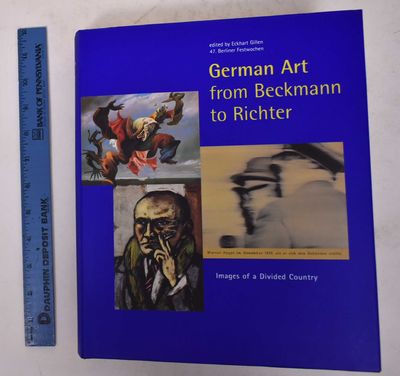 by Gillen, Eckart (editor)
Cologne: DuMont, 1997. Hardcover. VG/VG. Black boards with yellow stamped lettering. Blue and color-illustrated dust jacket with yellow and white lettering. 546 pp. Color and BW illustrations. The dramatic fall of the Berlin Wall in 1989 brought the division of Germany to an end. This booka survey of German art between 1945 and 1990compares how art mirrored the different political circumstances in the two German states during this period. It reveals for the first time how artists from East and West Germany responded to the Nazi dictatorship, the Holocaust and the world war, and various political developments, showing that the dividing line between East and West was much less strict than has been imagined.Authorities on German art discuss major works by such artists as Max Beckmann, Max Ernst, Otto Dix, Josef Albers, Georg Baselitz, Eva Hesse, Gerhard Richter, Josef Beuys, Anselm Kiefer, Hanne Darboven, and others. The book also includes biographies of the artists. -- Publisher's description. (Inventory #: 170435)
$45.00 add to cart or Buy Direct from Mullen Books
Share this item