The Hawley Collection of Violins. With a history of their makers and a brief review of the evolution and decline of the art of violin-making in Italy 1500-1800 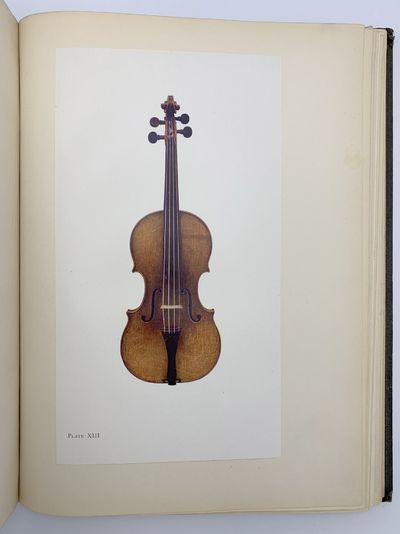 by LYON & HEALY
Chicago: Lyon & Healy, 1904. A very good, if slightly shaken, copy, spine label worn, and with some wear at corners, a few short marginal tears and occasional light handling creases. Small folio (305 x 228 mm). Black-and-white portrait of Royal de Forest Hawley, and 36 mounted plates, of which most in color; printed tissue guards preserved. Original red cloth-backed boards, printed paper label on spine. FIRST EDITION, number 1399 of 2000 copies. With a fine provenance: From the collection of David W. Young, who bought the "Goding" Amati that is described herein. Young inscribes the front flyleaf: "This rare book purchased from R. Wurlitzer in year 1961, at time I obtained the 'Goding' Amati violin of 1662 from Lyon & Healy. - signed - David W. Young at 18508 Clyde Ave. Homewood, Ill U.S.A." Another similar inscription appears on another flyleaf. The "Goding" Amati is described in the catalogue on p. 48, within the broader historical context of the famous Cremonese violin makers: "The Goding Amati is covered with a coating of magnificent varnish of a golden brown color, the texture of which is soft; and the evenness of skill of its application invokes the admiration of the connoisseur at a glance. It formed a part of the famous James Goding collection, to which the King Joseph Guarneri also belonged..." Hawley's collection was a veritable encyclopedia of classical violin making. Lyon & Healy acquired the collection in total after his death in 1893, and published this catalogue, which established their reputation as America's eminent dealer at the beginning of the Twentieth Century. The remainder of the catalogue includes images and texts about instruments by Stradivari (the Healy and the Earl), Guarneri del Gesu (King Joseph and Jarnowick), Maggini, Bergonzi, Rogeri, Guadagnini, Joseph filius Andrea Guarneri, Stainer, and Lupot. (Inventory #: 404950)
$500.00 add to cart Available from Riverrun Books
Share this item