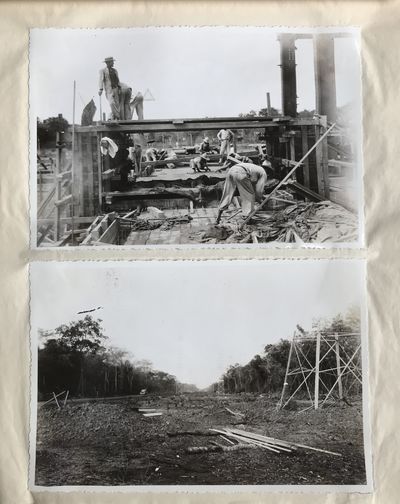 by [Venezuela]
[Venezuela], 1938. Very good.. 97 silver gelatin photographs measuring 6.75 x 4.5 and 5.5 x 3.5 inches. Oblong quarto. Original red half cloth and boards, manuscript label on front cover. Photos affixed at corners to thin paper leaves. Photo captions printed on versos of images, visible through mounting leaf. An interesting album, depicting the construction of a power plant in Pueblo Viejo, Venezuela, accomplished by the J.G. White Engineering Corp of New York, whose stamp appears on the back of each photograph, along with a description of the image and an image number. Pueblo Viejo is on the northern border of Venezuela, near the Caribbean Sea. The Venezuelan Oil Concession was originally a British firm, but by the 1920s the majority of the company stock was owned by Royal Dutch Shell. The photographs sequentially illustrate the construction from surveying the initial lot to laying the foundations and building construction. In addition to the buildings, there are also images of the construction of the electrical grid and the turbines to produce the electricity. A wonderfully detailed series of images. (Inventory #: 543)
$750.00 add to cart Available from
McBride Rare Books
Share this item