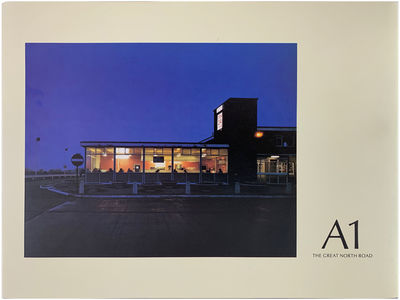 by GRAHAM, Paul
Bristol: Grey Editions, 1983. Fine in a fine jacket.. First Edition. Oblong quarto. SIGNED by the photographer. One of about 75 copies issued in hard cover, but distributed only in the paperback edition. The colophon states the hardcover edition was issued in a slipcase with a print, but we believe the slipcase and print were not executed at the time of publication. A few copies with prints have sold at auctions over the last several years, but these prints were added after the fact. Paul Graham's first book: one of the seminal British titles of last 25 years. A comprehensive documentary survey of the A1 highway in England: the only road to run the length of the country, from London to Edinburgh. With an introduction by Rupert Martin and an afterword by the photographer. Can be looked at as the modern British equivalent of Robert Frank's, "The Americans". (Inventory #: 24635)
$6500.00 add to cart or Buy Direct from Harper's Books
Share this item
Harper's Books
Offered by