American antiquities, and discoveries in the West: being an exhibition of the evidence that an ancient population of partially civilized nations, differing entirely from those of the present Indians, peopled America... and inquiries into their origin, with a copious description of many of their stupendous works.. 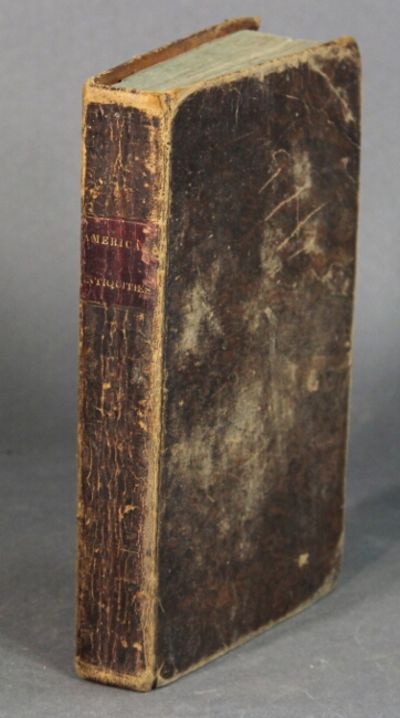 by Priest, Josiah
Albany: Hoffman and White, 1833. Third edition revised, 8vo, pp. 100; 2 folding plates, a few text illustrations; original full calf with red morocco label on spine, speckled edges, light rubbing to boards, front folding plate spotted and wrinkled from careless folding, second, smaller plate also artlessly folded, edges spotted, good and sound. A polemical text on the origin of civilization in the Americas. "Priest argued that America was the land where Noah's Ark came to rest and suggested that at least some of the mounds had been built before the Deluge. Surveying the various themes of mound builder origins, he could not decide whether the mounds were the work of Polynesians, Egyptians, Greeks, Romans, Israelites, Scandinavians, Welsh, Scots, or Chinese, although he felt certain the Indians had not built them "As the frontier receded and Americans found their lives becoming more regulated and urbanized, they were willing to seek escape in Priest's world. Ultimately, it is not surprising he attempted to write an epic of prehistoric America. His effort is so ambitious, so ludicrous in the face of archaeological evidence, such a collection of bizarre conjecture, such a failed synthesis of so much diverse information, and so ultimately fascinating, that it stands as one of the great curiosities in American antiquarian writing, and deserves far more attention than it has received" (Sloan, The Crimsoned Hills of Onondaga). (Inventory #: 53611)
$316.25 add to cart or Buy Direct from
Rulon-Miller Books
Share this item