Tribute of the Chamber of Commerce of the state of New-York to the memory of Anson Burlingame, late ambassador from China, March 3d, 1870. Eulogy 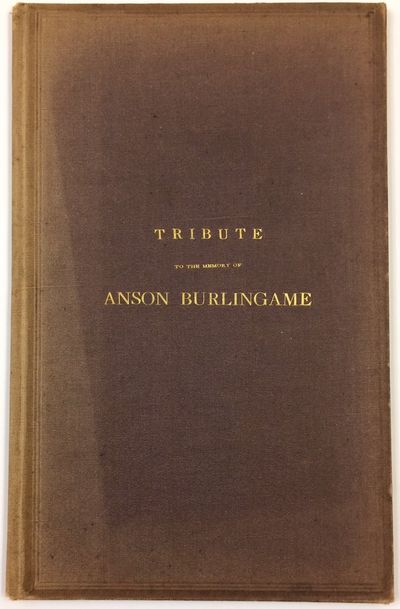 by Cowdin, Elliot C.
New York: John W. Amerman, Printer, 1870. 11p., slender hardcover, gilt title on front board; sun-fading along spine and part of front cover, interior very good. Gilt textblock edges. Commemorates the Harvard Law School graduate, abolitionist, and Massachusetts politician who had been appointed by Lincoln as minister to the Qing Empire. During his tenure Burlingame opposed imperialism and its designs on China, which so impressed the Qing court that when his tenure had expired, the Chinese government hired him to serve as its "envoy extraordinary and minister plenipotentiary" to head a Chinese diplomatic mission to the US and Europe. As this tribute by Cowdin states, "It is one of the highest proofs of the keen sagacity and capacious heart of our friend, that he was able to understand and willing to appreciate both the people and the government of China, thus doing for them and for the world what no other foreigner had ever succeeded in accomplishing; and he early resolved that in due time he would make the true character of this ancient Empire known to the nations of the west." The city of Burlingame, California is named after him. (Inventory #: 235475)
$195.00 add to cart or Buy Direct from Bolerium Books
Share this item