View of St Anthony's Nose, on the North River, Province of New York, 1795 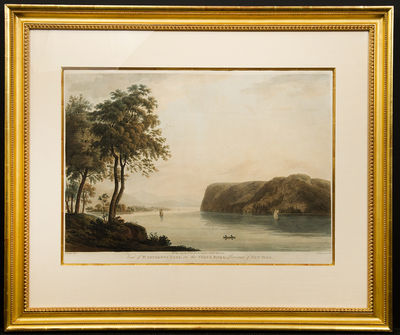 by FISHER, George Bulteel after, J.W. EDY, engraver and publisher
London: Published by John William Edy, 1795. Hand-colored aquatint. "This beautiful, early aquatint of Hudson River scenery features Anthony's Nose, a bold promontory of 900 feet on the Hudson near Peekskill" (Deak). This beautiful print is from a rare series of six views aquatinted by John William Edy from studies by Lieut. George Bulteel Fisher. Only two are of the United States, the remainder being of Canada. Lieut. George Bulteel Fisher was Aide-de-Camp. to Prince Edward (later Duke of Kent and Commander-in-Chief in Canada). Fisher made most of the drawings for these aquatints while in the Duke's service; and he dedicated the series to the Duke (hence the archaic reference to "the Province of New York"). Spendlove remarks, that the quality of these views are second to none, and that Fisher and Edy achieve an extremely fine effect by combining a broad sweeping technique, with an eye for minute detail. The present aquatint, features the distinctive outline of the headland known as 'St. Anthony's Nose', a 900-foot high promontory on the Hudson (or North River as it was also known at the time), close to Peekskill. The river flows around it; two men paddle a canoe across the foreground, while a sailboat is visible in the distance. The general treatment is broad and sweeping, but the richness of the foliage effects, combined with the close attention paid to the details of the tiny figures, all unite to a make an image of great beauty. Masses of exposed rock are painted in pale browns, framed by the luxuriant summer foliage in several shades of olive-green. Due to quarrying, Anthony's Nose has lost its distinctive shape, and this image is one of the few records of how Nature originally shaped it. Deak 188; Spendlove, The Face of Early Canada p.24; Stokes C1790-95-B-116. (Inventory #: 33461)
$4750.00 add to cart or Buy Direct from
Donald A. Heald Rare Books
Share this item
Donald A. Heald Rare Books
Offered by