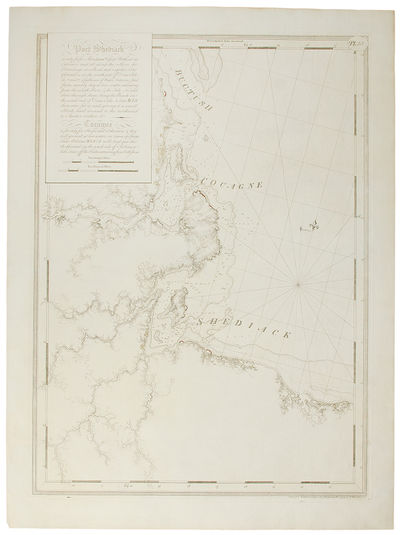 by DES BARRES, J.F.W. (1721-1824)
London: J. F. W. Des Barres for 'The Atlantic Neptune', 1781. Etched with aquatint and stippling. Some outline color. Platemark: 29 1/4 x 21 3/8 inches; sheet: 32 3/4 x 24 3/4 inches. Laid paper watermarked "J. Bates" with counter mark "J.B." A meticulous survey of a portion of the eastern coast of New Brunswick on the Northumberland Straits with soundings and topographical detailing. This chart, which appeared in Volume II of The Atlantic Neptune, was part of the surveying work conducted by Des Barres himself in the late 1760's and early 1770's. The first state was issued in 1776; this enhanced second state appeared in 1779. Des Barres, of Swiss-Huguenot extraction, studied under the great mathematician Daniel Bernoulli at the University of Basel, before continuing on to the Royal Military College at Woolwich. Upon the outbreak of hostilities with France in 1756, he joined the British Royal American Regiment as a military engineer. He came to the attention of General James Wolfe, who appointed him to join his personal detail. During this period he also worked with the future legendary explorer James Cook on a monumental chart of the St. Lawrence River. From 1762, Des Barres was enlisted to survey the coastlines of Nova Scotia, Newfoundland, and the Gulf of St. Lawrence, while his colleague, Samuel Holland charted the New England coast. He also managed to gain access to some surveys of the American South, Cuba and Jamaica. In 1774, Des Barres returned to England where he began work on The Neptune. His dedication to the project was so strong, that often at his own expense, he continually updated and added new charts and views up until 1784. That year he returned to Canada, where he remained for a further forty years, becoming a senior political figure and a wealthy land owner, and living to the advanced age of 103. The Atlantic Neptune, the most celebrated sea atlas, contained the first systematic survey of the east coast of North America. Des Barres's synergy of great empirical accuracy with the peerless artistic virtue of his aquatint views, created a work that "has been described as the most splendid collection of charts, plates and views ever published" (National Maritime Museum Catalogue). Upon the conclusion of the Seven Years War, Britain's empire in North America was greatly expanded, and this required the creation of a master atlas featuring new and accurate sea charts for use by the Royal Navy. Des Barres was charged with this Herculean task, publishing the first volume in London in 1775, which was soon followed by three further volumes. Des Barres's monumental endeavor eventually featured over two-hundred charts and views, many being found in several states. Des Barres's charts were immensely detailed, featuring both hydrographical and topographical information, and in many cases remained the most authoritative maps of the regions covered for several decades. Stevens 72h. (Inventory #: 20210)
$2,500.00 add to cart or Buy Direct from
Donald A. Heald Rare Books
Share this item
Donald A. Heald Rare Books
Offered by