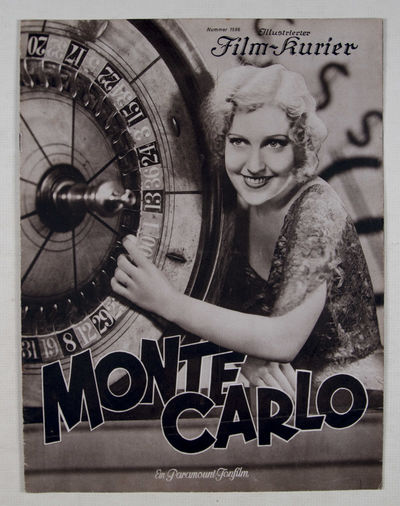 by Lubitsch, Ernst (director)
Berlin: Verlag Alfred Weiner, 1931. First edition. Softcover. vg. Quarto. 11.5x9". Unpaginated [6]. B/w photo-illustrated stapled wrappers, with black lettering on the front cover. The publication is an issue of the of the promotional supplement to the German weekly, Illustrierter Film-Kurier, promoting the German release of the 1930 American musical-comedy film "Monte Carlo", directed by Ernst Lubitch, produced and distributed by Paramont Pictures. The film which stars Jeanette MacDonald and Jack Buchanan was hailed at the time as a great example of the then relatively new musical film genre. The film notably includes the song "Beyond the Blue Horizon", composed for the film, by Leo Robin, Richard A. Whiting, and W. Franke Harling. The booklet is profusely illustrated throughout with finely printed b/w photogravure images and photomontage depicting scenes and characters from the film. Text throughout, including cast and crew credits, in German. Wrappers with minor creasing and rubbing to extremities. Interior with some light horizontal creases to a few pages. Light stains on the last page, with images mostly unaffected. Wrappers and interior in very good condition overall. Scarce. Protected by modern mylar. (Inventory #: 45195)
$300.00 add to cart or Buy Direct from
Eric Chaim Kline Bookseller
Share this item