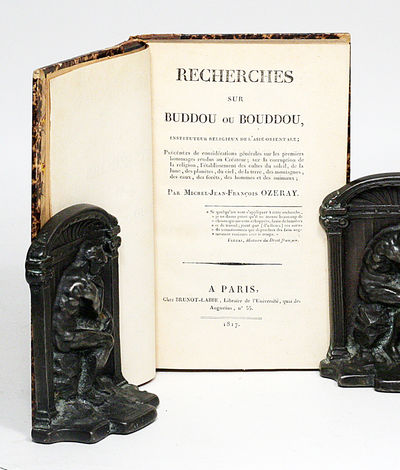 "... Ozeray's book represents a landmark in the history of the Western discovery of Buddhism. Published three years after the establishment of Europe's first academic chairs for indology and sinology and just before the organized academic study of Buddhist texts began, Ozeray's reliance on images and reports by embassies and European residents in Asian countries rather than missionary literature marks a watershed, as does the author's firm advocacy of a single historical founder, his unwillingness to engage in etymological and mythological flights of fancy, and his insistence on Buddhism's status as the largest of all religions of the Orient or even of the entire world. Though the book did not reach a large pan-European readership, it was read by intellectuals interested in Buddhism such as the philosopher Arthur Schopenhauer, Europe's first professor of Sinology Abel-Rémusat, and the linguist Julius Klaproth. Klaproth and Abel-Rémusat were around the time of publication expressing increasing interest in Buddhism and its history. Both were involved in the birth of France's earliest Orientalist journal, the Journal Asiatique, which from the early 1820s became one of Europe's most important sources of information about Buddhism. Ozeray's book thus stands near the end of the mythological speculation period and near the beginning of organized research on Asia's greatest religion" (Urs App, The First Western Book on Buddhism and Buddha).