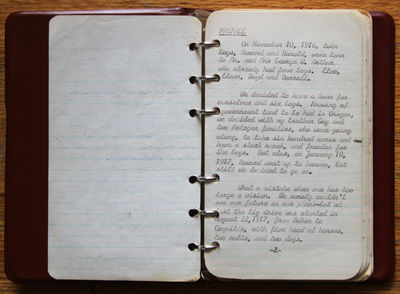 by Arthur, Maud G.,
12mo, 122 typed pp., dated 22 August 1917 to 7 June 1918; bound in small six ring binder, limp pleather binding, measuring 4" x 6", typed, good condition. There is a title-page, a one-page preface, and a two-page epilogue at rear bringing the family story up to 1937. Title page reads: "For Clayton and Jeannie Arthur and Family / A copy of Grandmother Arthur's diary / in her own words, of the family traveling / Oregon in a covered wagon. / copied by Laura Arthur" This is a typescript copy, made for the family, by a family member, of the manuscript original, the whereabouts of which, is unknown.
A curious diary, wherein a family seeking to improve their lives decides to move west across Oregon on hearing of the opening of government lands on the coast. They travel across the state using a covered wagon, the mode of Oregon's original pioneers. The diary recounts the events and occurrences along the way.

"September 1, 1917 Silvis Valley. The climax came when the Metzger's turned around and went back, afraid of the desert so they said but we never turn back is our motto. So, here we go on by ourselves. We hated to leave our traveling companions. This is another old plateau up high I the mountains, but not so high as Bear Valley, more like home, sage brush everywhere. Every now and then you see a lovely spring in the bank of a little raise in the ground. We had better luck, bagged three sage hens, which looked as large as turkeys. Then we arrived at a farm houses, but no one was home. So, we just stopped anyhow and put our tired horses in the corral and fed our hay to the horses that we packed for two days in case of an emergency Then we cooked our birds which were fine and had some to spare. Well with the whooping cough improving a little and the coyotes howling at eleven o'clock at night, I'll quit."
"September 7, 1917. Got up sick and three or four of the others have cramps. Something we ate or drank didn't agree with us. Our horses have no water, plenty of feed so we drive on, expect to get water early. About five miles before we came to water and it was no good, but it wet the horses' throats. We filled our canteens in case of an emergency. My headaches so bad I didn't get to see much of the country this morning. When we stopped for dinner it was pretty much the same, no water. As the evening draws near the feed seems to grow scarce and we got into more alkali beds. We draw into a small settlement with large windmills and plenty of fresh good water. But no one at home, there a padlock on the gates and a sign that says, "NO TRESPASSING," well what do you think of that in the middle of the desert, too tempting so they just crawl in the fence and take a tub and help themselves, so much good fine water. So, we have fine stew of jack rabbits. Seems to be the home of the jack rabbits, and cotton tail, the rattle snake and the coyote."
"September 8, 1917. We're in the desert still with plenty of rabbits and a nice little settlement every now and then. It looks so strange away out from nowhere. The people come to stay in the settlement and there is a small schoolhouse so I guess the people are trying to do justice to their children. They have stages here for transportation. Of course, if the time ever comes to, they can have water it will be a very prosperous country, as they have a mixture of soil here that looks might fine. Of course, there is lots of claims taken up that are deserted now but they claim that this is a very bad year here so maybe they have deserted it this year…"
"September 11, 1917. We survive after the storm and start on to Bend. We arrived at Bend about 11:30 A.M. We decided to stop in town only long enough to get our supplies. Quite a peculiar little town, although very prosperous with a payroll of $100,000 a month. It was a new town in 1910, with just a post office with five hundred inhabitants, now it has five thousand population. Now with kids hungry and tried we start out on our trip south. We leave town about three miles behind then camp and eat then hitch up and drive until almost dark leaving all water behind but take the beautiful pine forest road. The roads are awfully cut up by tourists traveling to the lakes so here we camp without water."
"September 19, 1917. We came on toward the National Park where tourists from all over the United States come to see it. As we came to the cross roads which road Fort Klamath or to the Pinnacle Road to Crater Lake, of course we wondered what the meaning of Pinnacles was or the way it was used. But as we came on, we didn't wonder any more as we came up a divide or ridge in the mountains, we looked down a Canyon more than 1,000 feet, a lovely stream flows through it. You can't understand such wonderful foundations of Nature's handy work. Looks like looking down on a city of churches and church towers of every description or it resembles a cemetery. It was not for the little stream rippling at the bottom of it, it would be almost as silent. Such wonder. We keep on until at least we came to where they were erecting a new log cabin which will be a beauty when finished. There we read a sign which said, a new National Park Station. There we stopped and asked if they could tell us how far it was to water, meaning of course how much farther down the road because we could see the water down 1,000 feet in the canyon and no way to get to it…."


(click for more details about Archive of American Artist Marion Greenwood, of New York City and Woodstock, New York, including Correspondence, Documents, Ephemera, Original Art, Photographs, along with Diaries, Journals, and Writings, of her husband, writer Robert Plate, 1929-1986)
View all from this seller>