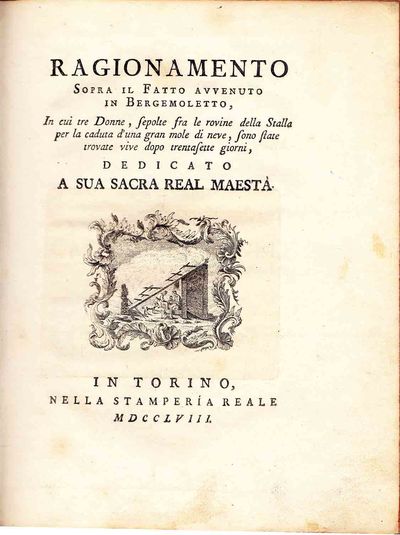 by Somis, Ignazio.
Torino: Nella stamperia reale, 1758. First edition. Very Good/This work, which describes the experiences of two sisters, their brother's wife, and her five-year-old child trapped in a ruined stable by an avalanche for 37 days, is now considered a pioneering study in post-traumatic stress disorder. It is the first scientific study of the effects of survival through a period of privation. Somis (1718-93), professor of medicine at the University of Torino, describes the tragic avalanche that destroyed the village of Bergemoletto in the high Alps west of Turin, and the survival of the child and three women for five weeks in a structure that we might call a lean-to buried under forty feet of snow. The husband and older son died in a desperate rescue attempt. Somis narrates the events passionately, replete with citations from Dante, but the medical analysis that follows is distinctly scientific. In a 2009 article on PTSD published in "Psychological Medicine," Brenda Parry-Jones wrote "no other publication has been located, to date, approaching the depth and detail of Somis." . Quarto (26 cm); [4] leaves, 166 pages, and two engraved folding plates. Engraved vignette on title pages (illustrating the event narrated in the text), engraved portrait of Carlo Emmanuele, two engraved initials with figures of cherubs. In contemporary vellum over boards, red leather label on spine. Pages lightly toned, with some rather negligible stains. Good margins. Bima, Catalogo ragionato, in "La Stampa Reale di Torino" (2003), p. 91; Wellcome V, 148; Blake NLM 426.. (Inventory #: 6103)
$2,500.00 add to cart Available from
Rodger Friedman Rare Book Studio
Share this item
Rodger Friedman Rare Book Studio
Offered by