What Michael Said to the Census-Taker 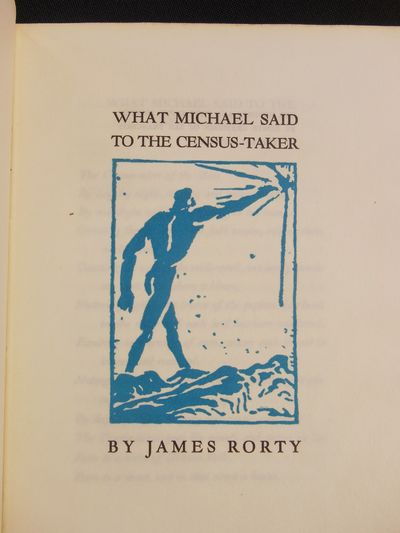 by Rorty, James; Sinel, Joseph (Woodcut)
(San Francisco): (Printed by Edwin Grabhorn) [Privately for James Rorty], 1922. Limited Edition. Hardcover. Near fine. Sinel, Joseph. One of 150 copies, ocatvo size, 12 pp. This long-form poem is by journalist, poet, and life-long social activist James Hancock Rorty (1890-1973); during WWI he served as a stretcher-bearer on the Argonne front, which (understandably) led to him becoming a pacifist. He afterwards moved to San Francisco, where he would have met Edwin Grabhorn when looking for a printer for this poem.

The poem can, and has been, interpreted in various ways; our reading leads us to believe Rorty is crying out against an inhuman and uncaring God/universe - the "Census-taker" who counts "the young of the field mouse" and "the seeds of the milk-weed". This "Census-taker" apparently cares nothing for humanity and wrongs done throughout the ages, recounting the inhuman acts done to great men (by Rorty's standards) by other men; among others, he recounts the Crucifixion, the martyrdom of John Huss by the Catholic Church, and the imprisonment of Eugene Debs.

Privately printed for Rorty by Edwin Grabhorn, this volume is in a variant binding, as there is no title page illustration on the front cover, although with the silver lettering on the shelfback.

___CONDITION: Volume is near fine, with clean boards, straight corners without rubbing, a strong, square text block with solid hinges, the interior is clean and bright, and entirely free of prior owner markings; a hint of rubbing at the head of the spine, some sunning to the spine and fore- and top edges of the boards, else fine.

___POSTAGE:  International customers, please note that additional postage may apply as the standard does not always cover costs; please inquire for details.

___Swan's Fine Books is pleased to be a member of the ABAA, ILAB, and IOBA and we stand behind every book we sell. Please contact us with any questions you may have, we are here to help. (Inventory #: 19031208)
$165.00 add to cart or Buy Direct from
Swan's Fine Books
Share this item