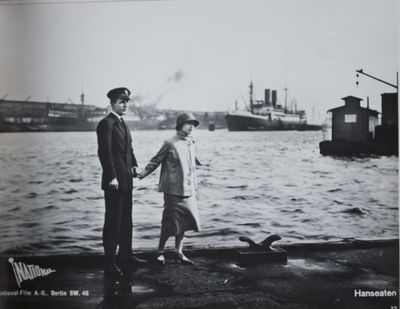 by Lamprecht, Gerhard (director)
Berlin: National-Film, 1925. First edition. Hardcover. g- to vg. Sextodecimo. 16 original b/w photographic prints bound in. Original brown leather faux-alligator skin covers with gold string-tied binding. Gilt-stamped insignia of the National Film production company on the front cover. This is the official promotional photo-album issued by the German film production company for their 1925 film "Hanseaten" (Hanseatics), containing 16 photographs showing stills from the film. The film was directed by prolific filmmaker Gerhard Lamprecht was adapted from the novel of the same name (1909), by Rudolf Herzog, and starred Tamara Karsavina, Hermine Sterler and Georg John among others. Binding with a large abrasion to the front cover, wearing away the material. National film logo rubbed and worn. Light staining on the back cover. A few of the photographs with minor sporadic water stains on the backs. Images clean and bright. Binding in good-, interior in very good condition overall. Extremely scarce. (Inventory #: 45379)
$450.00 add to cart or Buy Direct from
Eric Chaim Kline Bookseller
Share this item