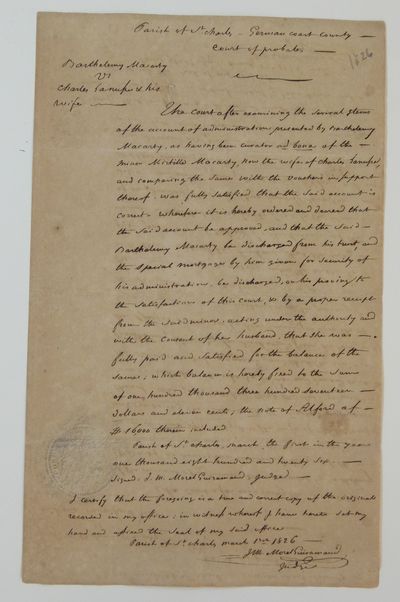 by LANUSSE, Mirtille (Macarty) (1811-1846)
St. Charles Parish, LA, 1826. unbound. very good. Exceedingly rare signed legal document, "Morel Guiramand", judge, folio, 1 page, Parish of St. Charles, German Coast County, Louisiana, Court of Probate, March 1st 1826, in the case of Barthelemy Macarty -v- Charles Lanusse & his wife, whereby Barthelemy Macarty, uncle and guardian of orphaned Mirtille Macarty and also the uncle of her husband Charles Barthelemy Lanusse, surrenders his guardianship so that the couple may take possession of Mirtille's inheritance, in part: "The Court after examining the several items of the account of administration present by Barthelemy Macarty, as having been curator and bona of the minor Mirtille Macarty, now the wife of Charles Lanusse...whereupon it is hereby ordered that Barthelemy Macarty be discharged from his duties...and that acting under the authority and with the consent of her husband, that she be fully paid and satisfied for the balance...fixed to the sum of One Hundred Thousand- Three Hundred and Seventeen Dollars, Court of St. Charles, March the 1st, 1826." *Mirtille Macarty married Charles Barthelemy Lanusse on January 21st 1826 and two months later this document acknowledges that marriage as being legal, and recognizes the fourteen year old as an adult. Once this document was adjudicated Mirtille and her husband would receive a sum of money equivalent to approximately twenty million dollars in today's funds. Despite the fact that Mirtille Macarty Lausse and her Aunt Delphine became murderers, the family also had a history of compassion towards their slaves. The family paternal uncles and cousins all had "free mistresses of color", with whom the had children. These children were all acknowledged and provided for by their fathers. Delphine had a half-sister Emesie, the dark-skinned (Negress) natural daughter of her father Louis-Barthelemy Macarty and his quadroon mistress. Her father recognized Emesie as his daughter and provided for her in his will, leaving $5000 and two slaves. In 1834 Delphine and her brother Barthelemy, the guardian of Mirtille Macarty mentioned in the document, made eighteen year old Emesie a gift of a slave from their estate as a demonstration of their affection. Condition: Evenly toned with raised blind embossed seal, visible with very light pencil shading. Overall very good. A member of the powerful and influential Macarty Dynasty of Louisiana who were at one time one of the most important Creole families in the state (1800's). As controversial as successful - the family could boast of having produced a Mayor as well as several judges, wealthy land speculators, and owners of several large plantations. On the ugly side, Marie Delphine Macarty (LaLaurie), the aunt of Mirtille Lanusse, was a Creole socialite and serial killer who tortured and murdered slave in her household. Not to be outdone, Madame Mirtille Lanusse herself was called out for excessive cruelty to her slaves. Records claim she "whipped a Negress to death and treated another so curelly that she died in a short while after." However the matter was hushed up because of the lady's position in society, and the fact that her husband was a notable New Orleans banker named Charles Bathelemy Lanusse, who was actually her first cousin whom she married at age fourteen. (Inventory #: 290333)
$15,000.00 add to cart or Buy Direct from
Argosy Book Store
Share this item