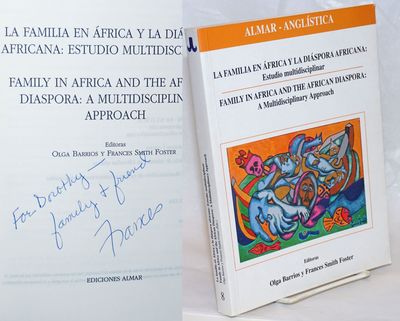 by Barrios, Olga y Frances Smith Foster, editoras
Salamanca Spain: Ediciones Almar, 2004. Paperback. xxx, 308p., illustrated with b&w artwork, texts in Spanish with all duplicated in English, softbound in 9.5x6.5 inch decorated wraps. Slight edgewear, a clean sound copy with no markings, except for a presentation inscription on titlepage signed (as "Frances") by the co-author. Some destinations in the diaspora were to other parts of Africa; some to countries bordering the Indian Ocean, as Arab countries and to Southeast Asia. Whatever the destination, woman-centered groups were fundamental. Colecion Almar-Anglistica, serie ensayos. (Inventory #: 236343)
$25.00 add to cart or Buy Direct from Bolerium Books
Share this item