[Binding, Fine- Adams Bindery, ONE OF ONLY FOUR COPIES] Horace Walpole and the Strawberry Hill Press (1757-1789) 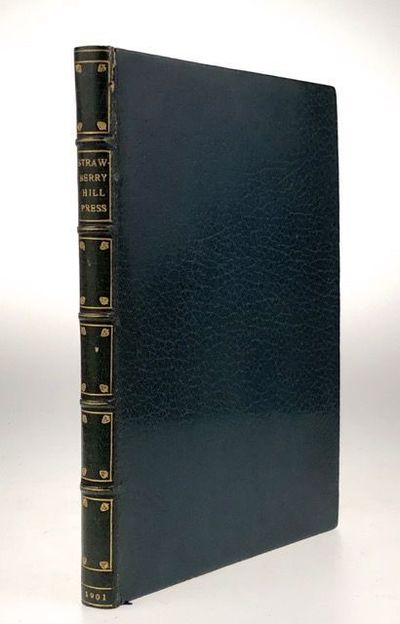 by Havens, Munson Aldrich
Canton, PA: Lewis Buddy, 3rd; The Kirgate Press, 1901. First edition. First edition. A superbly bound binding by Adams on the excessively scarce and highly limited Japan Vellum edition for this Kirgate Press title, limited to only FOUR COPIES, so stated by Lewis Buddy, its founder, in a holograph note below the printed limitation note: "This beign one of only four copies printed on Japan Paper. Lewis Buddy, III." A truly fine example, bound in fine blue polished crushed levant goatskin with six compartments, each with single gilt frame and strawberries at each corner. As well, the dentelles, with double frame gilt ruling, have slightly larger gilt strawberries, two per dentelle. The binding is signed, "The Adams Bindery," lower front dentelle. Fine. Most scarce. (Inventory #: 4502)
$2,250.00 add to cart or Buy Direct from
Nudelman Rare Books
Share this item

[Armstrong, Margaret] Sentimental Tommy, the Story of His Boyhood

[Binding, Fine- Louis Herman Kinder, at The Roycroft Bindery] White Hyacinths, Being a Book of the Heart

East Aurora, NY : The Roycrofters , 1907
(click for more details about [Binding, Fine- Louis Herman Kinder, at The Roycroft Bindery] White Hyacinths, Being a Book of the Heart)
View all from this seller>