The Land of Silence; A History of Arctic and Antarctic Exploration 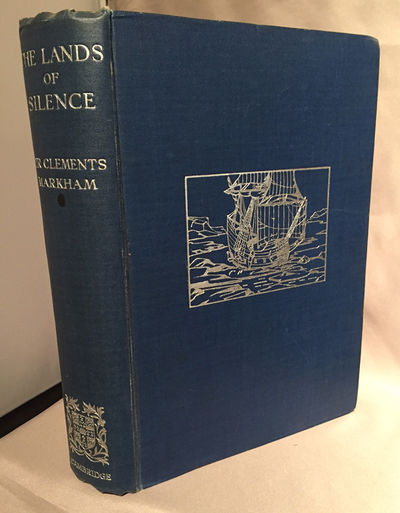 by Markham, Sir Clements R.
Cambridge, UK: University Press, 1921. First Edition. Very Good. Cambridge, UK: University Press; 1921; First Edition [7x10"]; Blue cloth covers with embossed silver lettering and colophon on spine, embossed illustration of early sailing ship in silver on front, uncut pages; xii, 539 pp., frontispiece image of Markham painting, foldout map, 50 maps and illustrations from photographs; Some shelf wear to bottom edge and hinges, corners bumped, black ink spot on spine, missing title page tissue guard, offset from tipped in handmade bookmark p. 91, some offset on endpapers, prior owner ink inscription on front free endpaper, tipped in London bookseller 1943 receipt. Overall condition is very good [Arctic Bibliography 10939, Rosove 1203]. Sir Clements R. Markham [1830-1916] was a geographer, explorer, writer and secretary of the Royal Geographical Society (RGS) for 25 years from 1863 to 1888. He entered the Navy at 14 and was a midshipman on the Assistance in his first Arctic voyage [1850-51] to search for Sir John Franklin' lost expedition. They found evidence of the expedition and three graves on Beechey Is. and wintered over to continue to search and explore. On returning, he resigned from the Navy and continued to explore the world and became part of the Indian administration. He also participated in a second Arctic expedition [1875-76] to Greenland. In 1893, he was drafted as President of the RGS and over the next 12 years promoted Antarctic and Arctic exploration as the destiny of the British Empire. His support of Scott (a Royal Navy commander) over Shackleton and others was unexplained, and as his control of expedition funding. In this book, he is dismissive of Shackleton's role in Antarctic exploration. (Inventory #: 11676)
$633.00 add to cart Available from
David Spilman Fine Books
Share this item