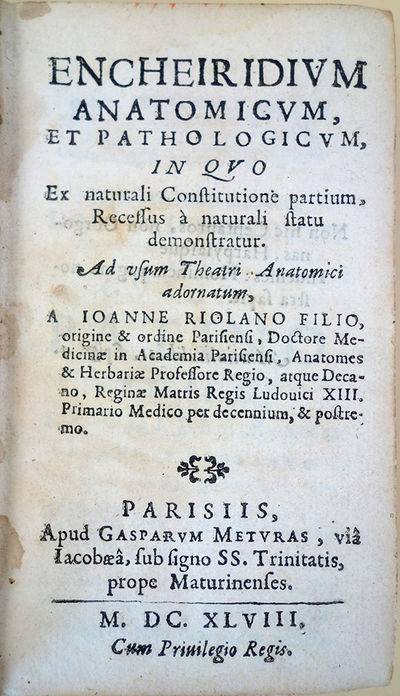 by Riolan, Jean
Paris: apud Gasparum Meturas, 1648. Riolan, Jean (1577-1657). Encheiridium anatomicum, et pathologicum, in quo ex naturali constitutione partium, recessus ŕ naturali statu demonstratur. 12mo. [28], 618, [14]pp. Paris: Apud Gasparum Meturas, 1648. 127 x 74 mm. Calf, gilt spine ca; 1648, hinges cracked but holding, spine extremities a bit chipped, light edgewear. Minor browning, but very good. Very Rare First Edition, with no copies except this one appearing in auction records; it was published one year before the 1649 Leiden edition that is sometimes erroneously cited as the first. Riolan's Encheiridium anatomicum is the work he is best remembered for, since its rejection of some of William Harvey's ideas on blood circulation prompted Harvey to reply with his Exercitationes duae anatomicae de circulatione sanguinis ad Joannem Riolanum (1649), the only published answer he ever issued to criticisms of De motu cordis. Contrary to Riolan's intent, his Encheiridium ended up helping to validate Harvey's theory, as Harvey used Exercitationes duae not only to demolish Riolan's Galenic notions on the circulation but also to reinforce his own ideas with more direct experimental evidence of the circulation than given in De motu cordis. Keynes, Life of William Harvey, p. 323. (Inventory #: 45023)
$3750.00 add to cart or Buy Direct from
Jeremy Norman & Co.
Share this item
Jeremy Norman & Co., Inc.
Offered by