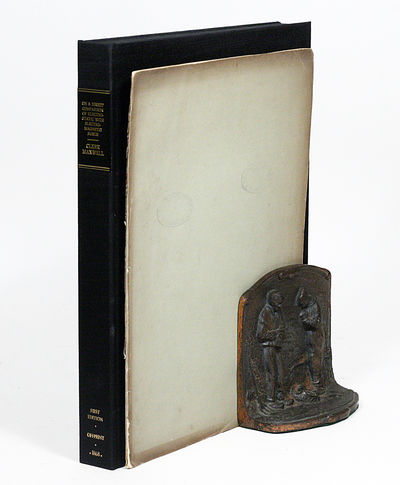 WITH AN EXTRAORDINARY PROVENANCE: THIS COPY FROM THE ESTEEMED CAVENDISH LABORATORY, FOUNDED IN 1874 WITH MAXWELL AS ITS FIRST DIRECTOR. In "On a Method of Making a Direct Comparison of Electrostatic with Electromagnetic Force", Maxwell finally gives experimental proof that light consists of electromagnetic waves, which he had postulated in his fourth paper, the epoch-making "A dynamical theory of the electromagnetic field" (1865). "[Michael] Faraday (1791-1867) had abandoned the notion of 'action at a distance' for the concept of the 'fields of force' surrounding bodies by which they act upon one another electromagnetically ... Clerk Maxwell (1831-79), who may well be judged the greatest theoretical physicist of the nineteenth century, was happy to acknowledge his debt to Faraday; for what he did was to construct the mathematical theory of the field ... the developed field-theory, expressed in twenty equations, was purely and elegantly mathematical" (PMM 355).

In the "Note on the Electromagnetic Theory of Light" [the second paper included here], Maxwell greatly simplifies the 20 equations from the 1865 paper, into four theorems, roughly equivalent to the four fundamental Maxwell equations we know today: "When in 1868 Maxwell published the results of his new measurement of the ratio c of the electromagnetic to the electrostatic charge unit, he restated the electromagnetic theory of light 'in the simplest form, deducing it from admitted facts, and shewing the connection between the experiments already described [for the measurement of c] and those which determine the velocity of light.'  The 'admitted facts' were Oersted's electromagnetism, Faraday's law of electromagnetic induction, and Faraday's doctrine of polarization.  From them Maxwell extracted four simple 'theorems' expressing in words the integrals of the magnetic and electric intensities on closed curves, the relation between electric intensity and displacement, and the displacement current." (Oliver Darrigol, "Electrodynamics from Ampere to Einstein").

In "A dynamical theory" Maxwell showed that electromagnetic waves should propagate with a speed equal to the ratio of the electrostatic and electromagnetic units of charge. To prove his postulate on the nature of light, it was therefore necessary to accurately measure this ratio and compare it with direct measurements of the speed of light. Maxwell describes this experiment and its results in the first part of the present paper: he finds that the ratio is about 3% below the speed of light according to a recent measurement by the French physicist Léon Foucault (1819-68). The second part of the paper gives a simplified formulation of the equations describing the electromagnetic field. In "A dynamical theory" "Maxwell remarked that the equations might be condensed, but "to eliminate a quantity which expresses a useful idea would be rather a loss than a gain in this stage of our enquiry." He had in fact simplified the equations in his fifth major paper, the short but important "Note on the electromagnetic theory of light" (1868), writing them in integral form, based on four postulates derived from electrical experiments. This may be called the electrical formulation of the theory, in contrast with the original dynamical formulation. It was later independently developed by Heaviside and Hertz and passed into the textbooks. It has the advantage of compactness and symmetry" (Everitt, pp. 108-9). "Maxwell's 1868 paper was of considerable historical importance, for it set forward his theory in the simple form in which it was taken up and developed by others" (Hendry, p. 226).

Provenance: With stamps from the Cavendish Laboratory, Cambridge. "The Cavendish Laboratory has an extraordinary history of discovery and innovation in Physics since its opening in 1874 under the direction of James Clerk Maxwell, the University's first Cavendish Professor of Experimental Physics... Since its foundation, the Laboratory has had great fortune in appointing Cavendish professors who, between them, have changed completely our understanding of the physical world. Maxwell did not live to see his theories of electricity, magnetism and statistical physics fully confirmed by experiment, but his practical legacy was the design and equipping of the new Laboratory. Maxwell died in 1879 at the early age of 48 and was succeeded by Lord Rayleigh, who was responsible for setting up a systematic course of instruction in experimental physics, which has remained at the core of the Laboratory's teaching programme...

"JJ Thomson succeeded Rayleigh in 1884 and began the revolution in physics which was to lead to the discovery of quantum mechanics in the 1920s. During Thomson's long tenure, the University allowed students from outside Cambridge to study for the new degree of Doctor of Philosophy in 1895. Among the first generation of physics graduate students were Ernest Rutherford and Charles Wilson, who, along with JJ Thomson, were to win Nobel prizes for their researches. The discovery of the electron by Thomson, the invention of the Cloud chamber by Wilson, the discovery of artificial nuclear fission by Rutherford are examples of the extraordinary advances in experimental technique which ushered in what became known as modern physics" ("The History of the Cavendish", University of Cambridge website).

Note: We are not aware of any other copy of this offprint having appeared in commerce. OCLC lists only six copies (Burndy, Huntington, MIT and Stanford in the US; King's College, London and Manchester in the UK).

A SCARCE OFFPRINT OF ONE OF MAXWELL'S MAJOR PAPERS WITH AN OUTSTANDING PROVENANCE. (Inventory #: 2262)
$18,500.00 add to cart or Buy Direct from
Manhattan Rare Book Company
Share this item