The History of Texas; or, The Emigrant's, Farmer's, and Politician's Guide to the Character, Climate, Soil and Productions of that Country... 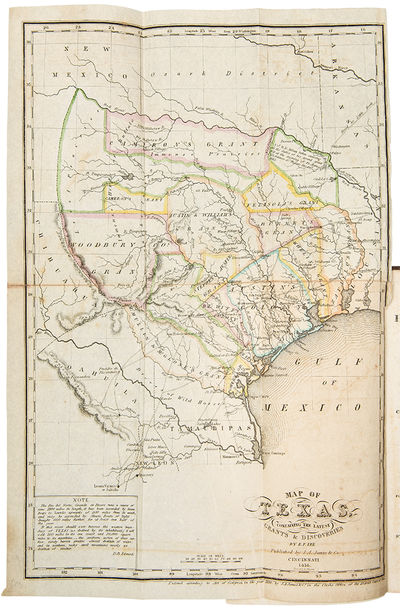 by EDWARD, David B.
Cincinnati: J. A. James & Co, 1836. 12mo. (7 1/4 x 4 1/2 inches). 336, [2]pp. Publisher's advertising leaf in the rear. Engraved folding map, hand-colored in outline. Publisher's brown cloth, rebacked retaining most of the original spine and paper lettering piece. An early and important work on Texas, with the Map of Texas. "The map shows towns, rivers, colonies, grants, Indian villages, mountains, roads, silver mines in Mexico and on the San Saba River, iron ore, copper mine, note on Col. B.R. Milam's death, comments on wild life and topography, salt works on Galveston Bay, site of General Toledo's defeat in 1813....There is also a printed note by D.B. Edwards on the Rio del Norte, its navigability and its possibilities as a southwestern boundary for Texas" - Day. "As a preceptor of Gonzales Seminary and resident of Texas, Edward was well equipped to record his observations accurately" - Graff. "This contemporary history by Edward, notwithstanding some idiosyncrasies of the author, is one of the essential Texas books. It gives a good account of the physical features and towns and products of the Texas of 1835...page 177 to the end are devoted to the political events from 1832 to about October, 1835..." - Streeter. "Conditions just prior to the Revolution described by an actual observer" - Howes. Basic Texas Books 53; Clark iii:35; Day, Maps of Texas 388; Graff 1208; Howes e48, "aa"; Rader 1279; Raines, p.74; Reese, Best of the West 65; Sabin 21886; Streeter Texas 1198; Streeter Sale 344. (Inventory #: 36659)
$8,000.00 add to cart or Buy Direct from
Donald A. Heald Rare Books
Share this item
Donald A. Heald Rare Books
Offered by