Sickle Cell Anemia, a Molecular Disease. WITH: A Specific Chemical Difference Between the Globins of Normal Human and Sickle-Cell Anæmia Hæmoglobin 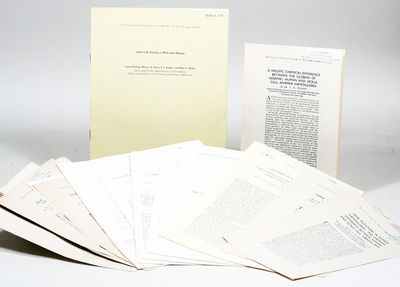 by PAULING, LINUS; ITANO, HARVEY A.; SINGER, S.J.; WELLS, IBERT C.; INGRAM, VERNON N.
Washington, DC: American Association for the Advancement of Science, 1949. First edition. Original Wrappers. Fine. FIRST EDITIONS, OFFPRINT ISSUES, IN ORIGINAL WRAPPERS, OF PAPERS ANNOUNCING THE DISCOVERY OF THE MOLECULAR BASIS OF SICKLE-CELL ANEMIA. Determining the extent to which biological traits (including susceptibility to certain diseases) are linked to genetic factors presents difficult, often intractable, analytical problems. Multiple genetic factors may interact in complex ways with each other and with environmental factors in shaping a single characteristic or trait of an organism; conversely, a single genetic change can have cascading effects on a broad range of traits. In some cases, however, specific genetic abnormalities can be linked in a clean, direct, and simple manner to specific diseases. An example of this is provided by the research described in the papers offered here, which firmly established the genetic and biological underpinning of sickle-cell anemia. Biologist Graham C. Walker called this work "one of the absolutely seminal discoveries in the history of molecular biology." (New York Times, August 25, 2006 obituary of Vernon Ingram).

"[Approximately 10%] of African-Americans and as many of 25% of black Africans carry a single copy of ... the gene for sickle-cell hemoglobin (hemoglobin S). Individuals who carry two copies of ... the gene for hemoglobin S suffer from sickle-cell anemia, in which [the unoxygenated form of hemoglobin S] forms insoluble filaments that deform erythrocytes [i.e., red blood cells, into a distinctive sickle shape]. ... In this painful, debilitating, and often fatal disease, the rigid-sickle-shaped [red blood] cells cannot easily pass through the capillaries. Consequently, in a sickle-cell 'crisis,' the blood flow to some tissues may be completely blocked, resulting in tissue death." (Donald Voet, et al., Fundamentals of Biochemistry: Life at the Molecular Level, 5th ed. 2016).

Molecules of hemoglobin, like those of all proteins, consist of chains of amino acids, with each amino acid in the chain connected to the next by a linkage known as a peptide bond. (The hemoglobin molecule is actually made up of four such chains.) In sickle-cell anemia, one amino acid (glutamic acid) is substituted for a different amino acid (valine) at a particular position in at least one of those four chains. That change in a single amino acid (out of roughly 560) is sufficient to create a "sticky" patch on the exterior surface of the molecule that can interact with a similar patch on a neighboring hemoglobin molecule, leading to the formation of the insoluble molecular aggregates that cause the condition. The amino-acid substitution is in turn caused by a change (as a result of an inherited mutation) in a single base pair in the hemoglobin gene.

"The nature of the disease was first understood by Linus Pauling, with what was even for him an astounding flash of physical intuition": that sickle-cell anemia "must be a molecular disease - a disease of the hemoglobin molecule." In 1949 Pauling and his student Harvey Itano established through electrophoresis (separation of molecules based on their electric charge) that molecules of sickle-cell hemoglobin had two to four more net positive charges than normal hemoglobin. (First offered paper.) "In July of that year, James V. Neel, a specialist in human genetics at the University of Michigan, published a crisp, short paper proving from the incidence of sickle-cell disease and the trait in American Negro families that the cause was a mutant gene, inherited in a Mendelian manner." The work of Pauling, Itano, and Neel thus provided "the first clear case of a change produced in a protein molecule by an allelic change [that is, a change in one of a homologous pair] in a single gene involved in synthesis." (Quotations from Horace F. Judson, The Eighth Day of Creation [expanded edition 1996]). "Pauling's article was extremely important for the history of modern medicine: by showing how a molecular disorder can explain the symptoms of an illness, it founded molecular medicine." (Michel Morange, A History of Molecular Biology, 1998).

In the years following the discoveries of Neel, Pauling, and Itano, "several efforts had been made to find the chemical basis of the difference between sickle-cell and normal human hemoglobin. These efforts had failed." Vernon N. Ingram was then working at the laboratory of Max Perutz. Encouraged by Perutz and by Francis Crick, and stimulated by Sanger's recent discovery of the complete structure of insulin (a small protein-like "oligopeptide" molecule), he decided to take the project on. Since the techniques that then existed did not provide any practical way to determine the amino acid sequence of the entire hemoglobin molecule, he adopted a divide and conquer strategy. His technique involved breaking the hemoglobin molecule up into specific fragments (peptides) using the enzyme trypsin, and then separating the peptides on a sheet of filter paper, using electrophoresis and partition chromatography in perpendicular directions. The result was a two dimensional array of spots, each one corresponding to a particular fragment of the complete protein. The position of one particular spot differed consistently depending upon whether normal or sickle-cell hemoglobin had been used. Subsequent work by Ingram's team demonstrated that the difference was caused by the substitution of one amino acid (valine) for another (glutamic acid) in the peptide corresponding to that spot. (Judson, op cit., pp. 303-07).

"Our finding of a single mutation changing one amino acid greatly strengthened the concept of a direct relationship between the linear genetic molecule (DNA, whose structure had just been elucidated) and the linear peptide [protein] chain (just established by Sanger for insulin). A good geneticist now also had to be a good biochemist!" (Vernon N. Ingram, "Sickle-Cell Anemia Hemoglobin: The Molecular Biology of the First 'Molecular Disease' - the Crucial Importance of Serendipity", Genetics 167:1-7; 2004).

Aside from establishing the underlying cause of sickle-cell disease, and demonstrating a clear link between genes, protein structure, and a specific disease, this research advanced the scientific community's understanding of the process by which genetic information is encoded in DNA. Today we know that groups of three consecutive base-pairs in the DNA molecule ("codons") specify a particular amino acid in a protein molecule, and that the codons are non-overlapping. By showing that a mutation could result in a change in only a single amino acid, Ingram's work also provided evidence against coding proposals based on overlapping codons (since a single mutation would in that case potentially cause changes in three consecutive amino acids).

Reminiscing in an interview, Francis Crick said: "We were sure there was a difference, and Vernon [Ingram] found it." "In fact, Vernon at one stage said he thought he had found two amino acids wrong. We weren't thinking about overlapping codes by then, and we said, 'Nonsense, Vernon, you go back and look again; you'll find there's one!' Crick laughed with great pleasure at the memory of his assurance. 'So I think we were among the few people in the world, at that time, who realized you should look for amino-acid differences, in protein sequences, due to mutations, you see. Genetically controlled. All you had to show was that it segregates in a Mendelian way which had been done for sickle-cell. So it was a perfect case.... And you see, Vernon Ingram's discovery made an enormous difference. Because people suddenly realized that there was this connection. It now became obvious; and what was clear to us before it was done then became clear to everybody." (Judson, op cit).

Ingram's research also opened the door to the possibility that genetic therapy could be used to treat sickle-cell disease. See "Genetic Treatment of a Molecular Disorder: Gene Therapy Approaches to Sickle Cell Disease", in Blood, 127: 839-48 (2016).

WITH: SIXTEEN OTHER PAPERS by Ingram and his co-workers relating to sickle-cell hemoglobin, all from Horowitz's library.

A RARE COLLECTION DOCUMENTING ONE OF THE MOST IMPORTANT DISCOVERIES OF MOLECULAR BIOLOGY. (Inventory #: 2265)
$6,500.00 add to cart or Buy Direct from
Manhattan Rare Book Company
Share this item