A Chapter on Street Nuisances. Extracted from "Passages from the life of a philosopher. 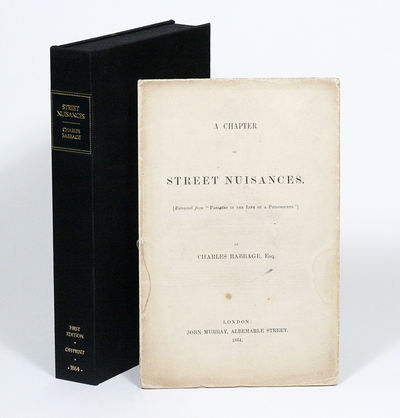 by BABBAGE, CHARLES
London: John Murray, 1864. First edition. Original wrappers. Very Good. EXCEPTIONALLY SCARCE FIRST EDITION IN ORIGINAL WRAPPERS; PRECEDING THE APPEARANCE IN "PASSAGES FROM THE LIFE OF A PHILOSOPHER". "Lady Lovelace wrote that Babbage hated music. He tolerated its more exquisite forms, but abhorred it as practiced on the street. 'Those whose minds are entirely unoccupied,' he wrote with some seriousness in Observations of Street Nuisances in 1864, 'receive [street music] with satisfaction, as filling up the vacuum of time.' He calculated that 25% of his working power had been destroyed by street nuisances, many of them intentional. Letters to the Times and the eventual enforcement of 'Babbage's Act,' which would squelch street nuisances, made him the target of ridicule. "The public tormented him with an unending parade of fiddlers, Punch-and-Judys, stilt-walkers, fanatic psalmists, and tub-thumpers. Some neighbors hired musicians to play outside his windows. Others willfully annoyed him with worn-out or damaged wind instruments. Placards were hung in local shops, abusing him. During on 80-day period Babbage counted 165 nuisances. One brass band played for five hours, with only a brief intermission. Another blew a penny tin whistle out his window toward Babbage's garden for a half hour daily, for 'many months.' "When Babbage went out, children followed and cursed him. Adults followed, too, but at a distance. Over a hundred people once skulked behind him before he could find a constable to disperse them. Dead carts and other 'offensive materials' were thrown at his house. Windows were broken. A man told him, 'You deserve to have your house burnt up, and yourself in it, and I will do it for you, you old villain.' Even when he was on his deathbed, the organ-grinders ground away implacably." (John A.N. Lee, et al., International Biographical Dictionary of Computer Pioneers). To this day, Babbage's preoccupation with "street nuisances" is often cited as a subject for ridicule, but A Chapter on Street Nuisances is a sincere plea from a suffering man that yields valuable insight into the mind of the great scientist. Interestingly, his "autopsy report, which came to light in 1983, raises the intriguing possibility that Babbage's acute sensitivity to noise was due to a medical condition involving cochlear degeneration caused by arterial disease" (Dictionary of National Biography). Although labeled as an "Extract" from Passages in the Life of a Philosopher, this volume precedes the publication in book form. There is even an ad on the verso of the front cover for Passages, noting optimistically that it "in a few days will be published" by John Murray (the publisher of the "Extract"). The book would, however, be delayed; Murray objected to a perceived off-color passage, and refused to publish it, ultimately yielding the publication rights to the eventual publisher Longman. The first edition is extremely rare: While the book publication was still awaiting the book publication, Murray published a second edition, and Longman published a third edition. The only other copies we have been able to locate that have been on the market have been the later editions. With a detailed "List of Mr. Babbage's Printed Papers" included at rear. London: John Murray, 1864. Octavo, original sewn printed wrappers; custom silk box. 32 pages. Title with light toning and small damp stain on outer edge; stitching loose. RARE. (Inventory #: 2268)
$3,900.00 add to cart or Buy Direct from
Manhattan Rare Book Company
Share this item