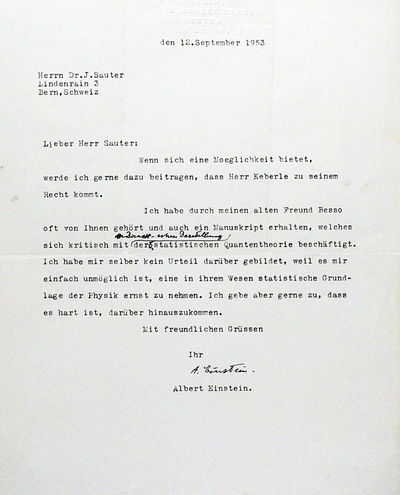 by EINSTEIN, ALBERT
Princeton, NJ: np, 1953. First edition. custom folder. Very Good. TOWARDS THE END OF HIS LIFE, EINSTEIN WRITES TO ONE OF HIS FRIENDS FROM THE PATENT OFFICE CONCERNING ONE OF THE CENTRAL STRUGGLES OF HIS SCIENTIFIC LIFE. COMMENTING ON THE WORK OF DIRAC, EINSTEIN ADMITS THAT ALTHOUGH HE "CAN'T TAKE A STATISTICAL FOUNDATION OF PHYSICS SERIOUSLY" HE FINDS IT "DIFFICULT TO MOVE BEYOND IT". Background: Einstein's struggle with accepting a strictly statistical quantum theory has been one of the most discussed and debated topics of twentieth-century physics. When introduced to the statistically-based quantum mechanics of Heisenberg, Born, and Jordan in 1926, Einstein famously wrote to Max Born that "Quantum mechanics is certainly imposing. But an inner voice tells me that it is not yet the real thing. The theory says a lot, but does not really bring us any closer to the secret of the 'old one.' I, at any rare, am convinced that He is not playing at dice." (Einstein letter to Born from 4 December 1926.) From the onset, "Einstein regarded the quantum theory as descriptively incomplete. What he meant was that, in typical cases, the probabilistic assertions provided by the theory for an individual quantum system do not exhaust all the relevant and true physical assertions about the system. Put briefly, according to Einstein, the typical statistical story told by quantum theory is not the whole story." (Arthur Fine, "What is Einstein's Statistical Interpretation, or, Is It Einstein for Whom Bell's Theorem Tolls?"). Einstein's discomfort with the new theory haunted him for the next three decades and his challenges to the theory were the cause of some of the most fertile and defining moments of modern science, notably the celebrated "Bohr-Einstein debates" begun at the Fifth Solvay Conference (1927) and his monumentally influential "EPR" paper of 1935 ("Can Quantum-Mechanical Description of Physical Reality Be Considered Complete?", written with Boris Podolsky and Nathan Rosen). As late as 1949, in his "Reply to Criticisms" (published in Albert Einstein: Philosopher-Scientist), Einstein notes that Born and Wolfgang Pauli, in their contributions to the volume "deprecate the fact that I reject the basic idea of contemporary statistical quantum theory, insofar as I do not believe that this fundamental concept will provide a useful basis for the whole of physics" and spends the majority of the essay explaining his position (and distinguishing between his acceptance of the model for "ensembles of systems" while still rejecting it for an "individual physical system"). The letter: Dated September 12, 1953, and written to his old colleague at the patent office in Bern, Joseph Sauter, the letter (translated from the original German) reads in full: Dear Mr. Sauter, If I am able to, I will gladly assist Mr. Keberle. I have heard of you often from my old friend Besso and I have also received a manuscript which deals critically with [handwritten] Dirac's presentation of the statistical approach to quantum theory. I have not been able to judge it myself because it is simply impossible for me to take a statistical foundation of physics seriously. But I have to admit that it is difficult to move beyond it. Yours sincerely, [signed] A. Einstein. Albert Einstein. The recipient, Joseph Sauter, worked with Einstein at the Bern Patent office during the years he was developing the ideas for his revolutionary papers of 1905. "Among his colleagues at the Patent Office Einstein discovered one with similar scientific interests-Dr. Josef Sauter, a French-Swiss, who had also studied at the Polytechnic and who had been Professor Weber's chief assistant for a while... Sauter, like Einstein, tried to fill the gaps in the Polytechnic's syllabus by private study, so that Einstein was able to discuss with him Maxwell's thermodynamics and Helmholtz's and Hertz's theoretical concepts... The two also discussed Einstein's publications on thermodynamics with the result that Sauter discovered a mistake in them, which Einstein accepted 'without being the least upset.' Fifty years later Einstein recalled 'that I had a lot of discussions with Sauter about... my thermal-statistical papers'... At least as important as his help with the 'rewriting and amending' were Sauter's connections with scientific circles in Bern, to which he soon introduced his new colleague." (Albrecht Fölsing, Albert Einstein). Edouard Keberle, mentioned in the first line by Einstein, was a Bulgarian physicist who, at the time of the letter, had just left the Institute of Theoretical Physics in Bern over a publication dispute. Not long after this letter - in early 1954 - Keberle accepted a post at the Midwest Research Institute in Kansas City. It is unclear if Einstein helped him in any way to get this position. Michele Besso - also mentioned in this letter - was Einstein's close lifelong friend. What prompts Einstein to declare that "it is simply impossible for me to take a statistical foundation of physics seriously" is the mention of a manuscript on the work of Paul Dirac. Philosophically, Dirac was almost the opposite of Einstein - he had no interest in probing the interpretations of quantum theory, wryly noting in his paper "The Inadequacies of Quantum Field Theory," that "The interpretation of quantum mechanics has been dealt with by many authors, and I do not want to discuss it here. I want to deal with more fundamental things." It is revealing in this letter that although Einstein re-states his objection to a statistical basis of quantum theory, he has doubts about his position, admitting - less than two years before his death - that he still has difficulty moving beyond it. Typed Letter Signed. Princeton, NJ: September 12, 1953. One 8.5x11 inch sheet with Einstein's embossed Mercer Street address at top. Custom silk presentation folder. With original mailing envelope with postmarks. A few small smudges, usual folds; fine condition. ONE OF EINSTEIN'S FINAL STATEMENTS ON ONE OF THE CENTRAL TENETS OF HIS SCIENTIFIC PHILOSOPHY. (Inventory #: 2270)
$29,000.00 add to cart or Buy Direct from
Manhattan Rare Book Company
Share this item