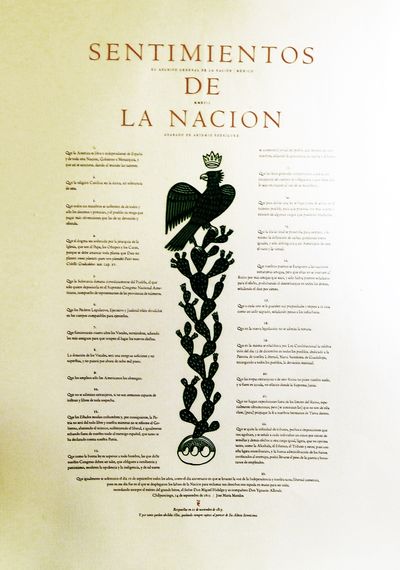 by Morelos, José María
Tacámbaro de Codallos: Taller Martín Pescador, 2017. Limited edition. Broadside. Fine. Broadside, 80 x 100 cm. Engraving by Artemio Rodriguez. Finely printed by Juan Pascoe on Tamayo de Ponte paper with a Vandercook Press. One of 84 copies. A fine copy. In Spanish. The engraving by Rodriguez is particularly striking, showing a crowned eagle on a prickly pear after a suggestion by the printer to the artist. Printed in red, black and green. MP Bibliography, 655, which indicates this is the second printing of the Sentimientos. Sentimientos de la Nación was a document presented by José María Morelos, leader of the insurgents in the Mexican War of Independence, to the National Constituent Congress in Chilpancingo (modern-day Guerrero) on September 14, 1813. It sets out in 23 points Morelos' vision for the future nation of Mexico and has been called the Mexican Bill of Rights. (Inventory #: 21080)
$350.00 add to cart or Buy Direct from Thorn Books
Share this item

Narrative of the Life of Frederick Douglass, An American Slave. Written by Himself

Santa Fe : Pennyroyal Press; The Press at the Palace of Governors , 2020
(click for more details)