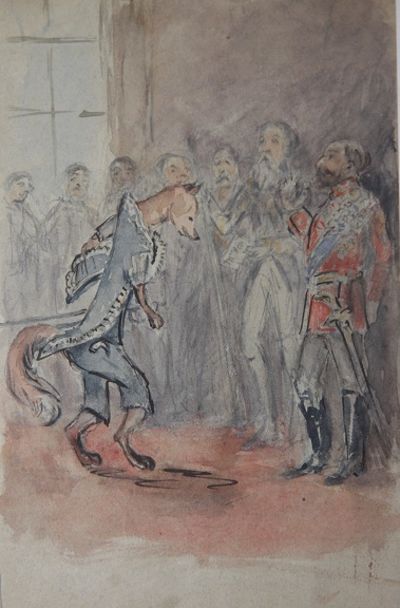 by McDonnell, Alexander (1857-1945) [or MacDonnell]
1880-1917. Full Morocco. Very Good. Oblong, 21 by 30 cm. 92 numbered leaves with content, with log entries, more or less statistical, on all the versos, and pictures and/or original drawings, mostly mounted, on 58 rectos, with some additional loose material. (129 numbered leaves in all.) Several of the log pages have mounted photos obscuring the log, as it is clear that this game book was at some point re-purposed to be a more general album, with some emphasis on sports, including also fishing, foxhunting and sailing, but also there are two pages of photos from South Africa, with photos of native tribesmen, ostriches, a hut, Cecil Rhodes house, etc. 13 original works of art -- watercolored, pencil, pen and ink -- in addition to numerous painted fish hook and fly vignettes, these sometimes done directly onto the page. Most charming are the comical illustrations of anthropomorphic foxes. Sepia photos are of the country estates, their stately homes and rural settings of the hunts as well as the people involved -- the hosts and guests during these country weekends. Many, but by no means, all of the photos have captions helpfully identifying the participants or the locations. And the log proper provides the names of those participating in the shooting, and often what would now be regarded as obscenely large kills. Among the many aristocrats and wealthy in the photographs and/or logs are Lady Randolph Churchill (Jennie Churchill), Arthur Balfour, Lady Minto (Mary, the famous 4th Countess), Henry Lascelles, the 5th Earl of Harewood, the 5th Earl of Carnavon (of King Tut fame, as well as the owner of the castle used in Downton Abbey), Baron Rothschild, Lord de Grey, Lord Ashburton, Prince Murat, the Duke of Buccleuch, Prince Duleep de Singh, Lord Rosebery, and on and on. Country homes include Longleat, Greystoke Castle, the Hirsel, Highcliffe Castle, etc. Alexander McDonnell was a son of the 5th Earl of Antrim and a clerk in the House of Lords. Obviously he was very well connected, and surely very popular, among the upper echelons of English society back then. And we would note that many of the most illustriously titled have frequent entries here; what we have here is a window into a cohesive social network, it is our sense. Condition: morocco binding has moderate to heavy wear along edges, some scuffs on the boards and spine. The leaves can have a waviness, the result of the interaction of the mounted material upon the leaves. A few photos are loose. There is a little bit of a scrappy quality to the book, as befitting a log book that was partially turned into something much more, and this quality is part of its charm as well. (Inventory #: 006400)
$2,500.00 add to cart Available from
White Fox Rare Books & Antiques
Share this item
White Fox Rare Books and Antiques
Offered by